While Rep. Eric Cantor tries to nuetralize the Democratic death threats vilifying his party, by suggesting "both sides" are threatened (the first time we're hearing about this new ploy, which took awhile to come up with a way to market), the real mindset continues to boil over on the right.

Alan Colmes interviews the crazy "break their windows" madman himself, Mike Vanderboegh. Not only does he take credit for the Democratic politicians vandalized offices, but he also claims that if the IRS can't collect the fine from you for not buying health insurance, they will kill you!

VANDERBOEGH: I am telling you we are motivated to break windows, we feel a deadly threat from the Federal government and the orders that the Democrat party has given us. [...]

VANDERBOEGH: May I tell you my personal motive for doing this? I’m trying to save the lives of Nancy Pelosi, and every one of these people who do not understand the unintended consequences of their actions. [...] Because they are not paying attention to the million of people across this deepening divide that politics no longer avails them. [...] We refuse to participate in the system, and we refuse to pay the fines, and we refuse arrest. Now where do you suppose that’s going but a thousand little Waco’s.

Vanderboegh is another conservative genius who knows just what the founding fathers were thinking. Colmes has the uncanny ability to get the most insane responses from his conservative guests without even trying. If you've wondered how "they" think, this scary look inside the thought process of the radical mind will chill you to the bone. Think for a moment after watching the video how you would reason with this sicko. 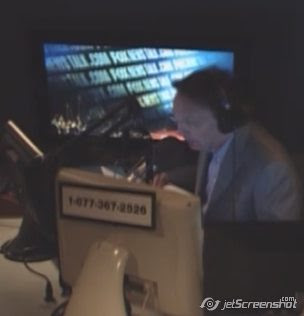 Here's Rachel Maddow on Vanderboegh and the other threats against Democrats. 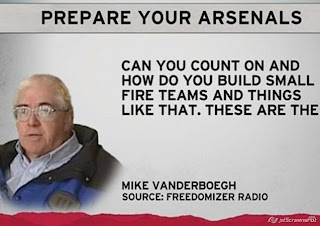