MSNBC's Chris Matthews takes the issue of mandating health care coverage to Nebraska's partisan Attorney General Jon Bruning, who along with 12 other AG's, have filed a lawsuit challenging the constitutionality of the new requirement.


AG Bruning appears utterly unprepared to make his case. Which leads to one undeniable conclusion: Republicans are extremely confident about bringing any kind of "constitutional" question to what we now know is one of the most activist supreme courts in American history. Precedent is ignored and the strict conservative constructionist "theory" is now the interpretation du jour of the land.

Winning their lawsuit doesn't cancel reform, but would seriously injure its funding formula, which depended on a large insurance pool of premiums. One "choice" already talked about is a five year opt out, allowing Americans the option of not buying coverage, while preventing them from changing their minds for the remaining five years period.

Chris Matthews point is a good one; The Republican AG's are really advocating the cause of health care freeloaders. They are described here by AG Bruning, as people "who can afford to take care of themselves." "...the next thing they can do is ... if they can force you to buy insurance, they can force us all to buy electric cars." Cars? A persons healthy body is like a car? God help us. 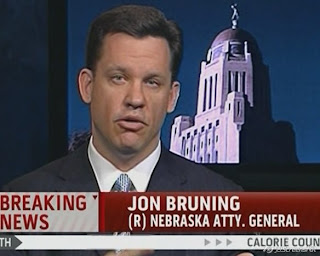