The True "Spirit" of the Tea Party Movement on display over Health Care Reform.

From my previous blog post, I wrote, "Americans for Prosperity's Tim Phillips was asked by Chris Matthews to describe "that guys spirit," why that guy was so angry toward a man suffering with Parkinson's disease, sitting on the ground asking for help."

That's the bottom line issue facing Americans today. Is this really the conversation, the debate? Spitting on a black congressman, a gay slure against another congressman, throwing money at a man with Parkinson's disease. That's a rational debate. Those are the kind of bully tactics most people should have grown out of when they hit puberty.

Here's the video story from ABC: 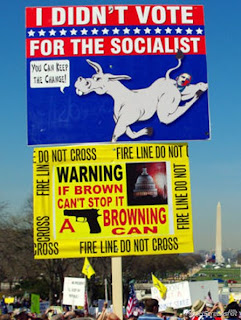