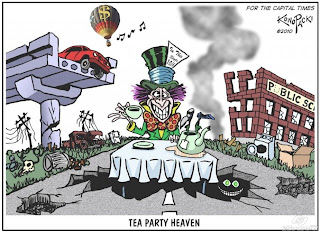 That's what this election is all about. So what was it the Republican candidates for Lt. Gov. put forward that deals with unemployment, the economy and education? Voter ID and ....?Wispolitics:

Wisconsin’s four Republican candidates for lieutenant governor expressed nearly identical viewpoints on the issues at their first joint forum, but one hinted that his competitors may not be as conservative as they appear. Given equal time to answer each question, the four agreed on every issue, professing vehement opposition to light rail, national health care and early release of certain prisoners, along with enthusiastic support for voter photo IDs and the national tea party movement.