Chief Justice John Roberts appeared hell bent on radicalizing the highest court by taking on what was typical right wing causes by the bus load, and deciding on them in an ultraconservative way. Remember doing away with 100 years of law banning price fixing? Gone. That was when I knew we were in for trouble.

With the conservatives abhorrence of government, and apologetically creating the Great Recession and politicizing the Justice Department, the supreme court was in their sites and the next branch of government to corrupt. And it has been. Justice Roberts has just primed the pump of outrage, as demonstrated below from the media coverage on Fox News. Sheppard Smith argues honestly with partisan analyst Judge Andrew Napolitano.


Napolitano confirmed that Obama was right about what the courts decision will mean in elections, but as you will see later in the clip, Sen. Orin Hatch is claiming just the opposite. And why not, Hatch will grab at any chance to convince a few low information voters that up is down. 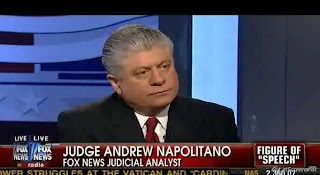