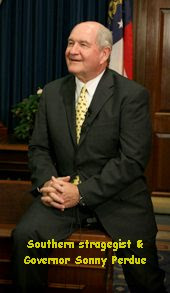 Attorney General and constitutional scholar Sonny Perdue...I mean Governor Perdue is NOT injecting politics and taxpayer spending into his ideological opposition to health care reform. It's simply an issue of principal. See for yourself...

(AP) -- Georgia Gov. Sonny Perdue is butting heads with the state's top lawyer, threatening to ''go it alone'' and sue the federal government over a new federal health care law. Democratic Attorney General Thurbert Baker declined Perdue's request to sue over the health care law, arguing the state doesn't have a ''a viable legal claim.'' ''I cannot in good conscience file a lawsuit against the United States that I believe has little or no chance of success and will undoubtedly consume significant state resources in a time of severe budgetary crisis,'' Baker wrote in a letter to the governor.

Flipping national criticism on its head, where Republican AG's are pressing the suit and four are running for governor, Perdue is saying NOT pursuing the lawsuit but still running for governor is behind the efforts of some to use none action as a way to inject politics. Huh? They said it, not me:

But Perdue spokesman Bert Brantley suggested politics might be behind Baker's decision not to sue over Democratic-backed bill. ''We know that he's a candidate for governor and so we know that there are multiple things that he's looking at or thinking about and that's fine,'' Brantley said.

The childish "I know you are but what am I" defense that works like magic on conservative brain mush.
Oh, by the way, Perdue's determination to sue over the federal mandate has nothing to do with HIS gubernatorial run for re-election.
Posted by John Peterson, Democurmudgeon at 3/25/2010 02:21:00 AM