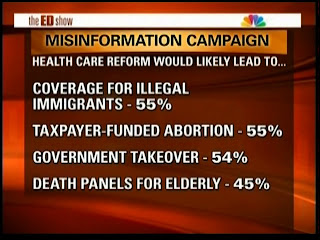 The news media took the word of the Republicans on this one, and still haven't caught on to these guys by fact checking everything they tell us.

Huffington Post: On Thursday, news broke that the Senate parliamentarian told Republicans that the House of Representatives would have to pass the Senate health care bill -- and the president would have to sign it into law -- before either chamber could pass fixes through reconciliation. The story, sourced solely to Republican aides, seemed to be a significant setback for Democrats.

A Democratic aide ... told the Huffington Post that it was their office's understanding that "the GOP misinterpreted his opinion on health care reform" -- though the aide would not elaborate.

For example, the option does exist that Vice President Biden, as president of the Senate, could rule that a reconciliation fix can pass through Congress without the health care bill it is designed to change being signed into law. The more common solution, as reiterated on Friday by a Democratic Hill aide, is that the party would attach a reconciliation fix bill to the base health care legislation on the condition that the latter is signed right before the former.
Posted by John Peterson, Democurmudgeon at 3/12/2010 07:43:00 PM