While the Republican propaganda noise machine denies they've been fanning the flames of revolution against their own government, they've been getting some help from the main stream media, like MSNBC. While Time's Mark Halperin paints a glowing picture of Palin, tea partiers and free speech, Pat Buchanan had this wonderful way to deal with dissent in the crowd:

Buchanan: "If somebody goes to a rally to disrupt it, and shout down a speaker, and deny the speaker their first amendment rights, and they get punched in the nose, it's their fault."

Buchanan: "People have a right to speak at these rallies, and someone to go in there and disrupt the right of 18,000 people...that's an outrage, and they should be thrown out of the hall. And if they get punched in the nose, I'd say that may be simple assault and the guy may be charged, but they insighted the assault, and some people would feel, maybe they're getting what they deserved." 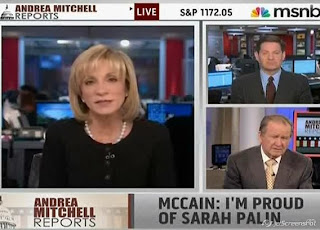