Clarence and Ginni Thomas; One a Supreme Court Justice, the other a Tea Party Lobbyist. Holy Crap! 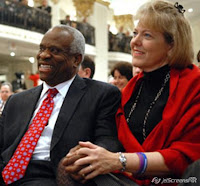 One of the most controversial and outrageous situations to come up in years has hit the media fan and may change the way we all look at the Supreme Court forever. Leave it up to the party that would turn our government over to the whims of the private sector to find a way to politicize the judicial branch without a second thought.

LA Times; As Virginia Thomas tells it … the story of her involvement in the "tea party" movement is the tale of an average citizen in action. "I am an ordinary citizen from Omaha, Neb., who just may have the chance to preserve
liberty along with you and other people like you," she said at a recent panel discussion with tea party leaders in Washington. Thomas went on to count herself among those energized into action by President Obama's "hard-left agenda."

She is the wife of Supreme Court Justice Clarence Thomas, and she has launched a tea-party-linked group that could test the traditional notions of political impartiality for the court. In January, Virginia Thomas created Liberty Central Inc., a nonprofit lobbying group whose website will organize activism around a set of conservative "core principles," she said.

No conflict of interest, no appearance of influence? Get this:

She said it would accept donations from various sources -- including corporations -- as allowed under campaign finance rules recently loosened by the Supreme Court.

"I adore all the new citizen patriots who are rising up across this country," Thomas said.

The press failed again, by trying not appear liberally bias. Can you imagine if the following happened to a liberal court justice?

In 2000, while at the Heritage Foundation, she was recruiting staff for a possible George W. Bush administration as her husband was hearing the case that would decide the election. When journalists reported her work, Thomas said she saw no conflict of interest and that she rarely discussed court matters with her husband. "We have our separate professional lives," she said at the time.

No problem, move along, nothing to see here! This loony fringe advocate, the wife of a supreme court justice, would certainly have a an influence over Clarence Thomas.

Her biography notes that Thomas is a fan of Rush Limbaugh and Mark Levin. "She is intrigued by Glenn Beck and listening carefully," the bio says.

Does screaming the loudest really get people and the press to back away? Yes.

In the video below, Lawrence O'Donnell interviews Jonathan Turley who questions the "in your face" decision to create a cloud over the impartiality of the court, and radio host Joe Madison has an interesting theory that Ginni Thomas will become a magnet for special interest groups because of her husband.

UPDATE 5-24-10: In the clip below, Ginni Thomas sounds about as extremist as first thought. But the one case she gives as an excuse for her activism- a judge and an elected official, is not the same by any stretch. They are both are accountable to the citizens and are elected. She on the other hand has no accountability, and thus no burden to be fair, which in turn reflects dramatically on Clarences judicial decisions. How could it not (which don't appear different in any way from Ginni's)?