Here we go again. Another right winger apologizes for getting caught just being himself. The media might give him a pass, but we shouldn't.

The man who berated and tossed dollar bills at a man with Parkinson's disease during a health care protest last week says he is remorseful and scared. "I snapped. I absolutely snapped and I can't explain it any other way," said Chris Reichert of Victorian Village, in a Dispatch interview.

"He's got every right to do what he did and some may say I did too, but what I did was shameful," Reichert said. "I haven't slept since that day. I made a donation (to a local Parkinson's disease group) and that starts the healing process."

Earlier this week, Reichert, 40, denied any involvement in a confrontation. He said he's fearful for his family after reading comments about his actions on the Internet. "I've been looking at the web sites," he said. "People are hunting for me."

"That was my first time at any political rally and I'm never going to another one," Reichert said. "I will never ever, ever go to another one."

Yes, the "armed" left wing are out to get ya! Unless he's afraid of "verbal abuse," this mean spirited, angry, anti-government thug doesn't have much to worry about. What he can't do is take back what his heart and spirit put on public display for all Americans to see. 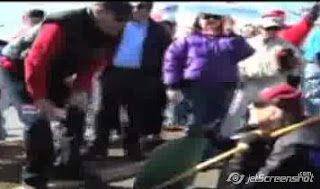