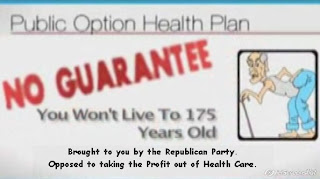 Under Republican Governor Tommy Thompson, "in 1999, Wisconsin became one of the first four states to take advantage of the opportunity to use federal SCHIP funds to provide Medicaid coverage to more parents as well as children."-Families USA

Sustained and expanded by Governor Jim Doyle, Wisconsin is now in a much better position to adapt to the federal health care reform requirements without spending a lot of money. That can't be said for those states with artificially low taxes, a lack of responsibility, no compassion and no hindsight. Take Arizona for instance. They had a budget shortfall and decided health care for children was a wasteful luxury item, so they dropped it.

NY Times: Arizona lawmakers must now find a way to maintain insurance coverage for 350,000 children and adults that they slashed just last week to help close a $2.6 billion budget deficit. “Any flexibility we used to have is gone with the new mandate,” said Tom Betlach, director of the Arizona Health Care Cost Containment System, which runs Medicaid.

For Arizona politicians, budget "flexibility" includes cutting kids health care. For everyone else, humane people and Democrats, such an option would be a last resort. Red states like to say they look less to government for help, brag about people doing without things like health care, as a sign of freedom and independence.

States with the largest uninsured populations, like Texas and California, are being required to significantly expand their Medicaid programs, they are precisely the ones that will face the biggest financial strains, In contrast, states like Massachusetts and Wisconsin, which already have extensive health care safety nets, do not expect to spend much more money, while still taking in billions in federal grants.

Even after Massachusetts voters voiced their objection to health care reform for everybody else, it turns out the state will actually save their citizens money. Ironic?:

In Massachusetts, for example, which already has a form of universal coverage, the federal government will wind up taking over from the state a significantly larger share of the costs of Medicaid coverage for adults without children, officials said. “On balance, it’s definitely a gain,” said Judy Ann Bigby, secretary of the Massachusetts Office of Health and Human Services.

But for all the whining, states will still have three years plus to plan ahead and make adjustments.

For the first three years, the federal government will pick up the entire cost of these new enrollees, but the state share then gradually increases until it reaches 10 percent in 2020. “Any flexibility we used to have is gone with the new mandate,” said Tom Betlach, director of the Arizona Health Care Cost Containment System, which runs Medicaid.