US Chamber of Commerce on Health Care Reform, "email Rep. Baldwin to urge HIM to oppose this deeply flawed bill." 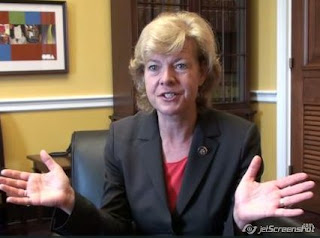 "Tammy is the first woman to serve in the U.S. House of Representatives from the State of Wisconsin and the first non-incumbent, openly gay person to serve in Congress." Bio from her government web page.


So imagine my surprise when I got this email shocker from the U.S. Chanber of Commerce: 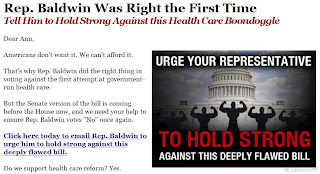 Ooops. So just in case Tammy voted for reform the first time, the Chamber offered a different take:

From: Bill Miller, U.S. Chamber of Commerce-Americans don't want it. Luckily, the House is voting again and has the chance to actually listen to what the American people want. It's a second chance to make things right -- but will Rep. Baldwin do the right thing? Click here today to email Rep. Baldwin to urge him to oppose this deeply flawed bill.

The problem with the emailing, is that it's a [fill in the blank] letter, where the name is plugged in, and defaults to a male congressperson.