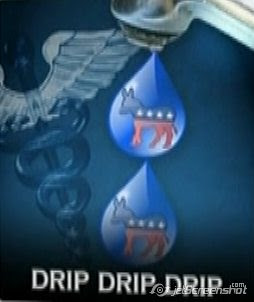 After doing a search of "my own" blog, I was reminded of these two extremely important stories we should pass along to Republican opponents like Rep. Paul Ryan. From the CBC, the article "Canada Finds out the Hard Way: For-profit clinics double-billing, Create Long Waiting Lines," should open a few eyes. Guess we could have seen this coming:

The federal government has failed to enforce the Canada Health Act's requirements for equal access to hospital care, instead allowing more for-profit medical clinics over the last five years. It investigated 130 for-profit surgical, MRI/CT and "boutique" clinics across Canada that sell access to doctors and health professionals for thousands of dollars per patient per year.

They found evidence to suspect 89 clinics in five provinces may have violated requirements by openly selling medically necessary services and double-billing both patients and governments for services.

According to the report:
- Canada spends more on private health care than France, Sweden, Italy or Germany.
- Private health care costs are increasing faster than public health care costs in Canada.
- 3.5 million Canadians are not insured or underinsured for essential medicines.
- expansion of for-profit surgical clinics in New Zealand and Australia dramatically increased wait lists for the same treatments in the public system

Swiss Health Care System, Private, mandated and Second most expensive.
Here are a few other important elements to the Swiss health care plan.

A third of the population purchases voluntary supplemental insurance that covers things like private hospital rooms and dental benefits. The policies differ mainly on deductibles ... $200 for adults. There is no deductible for children under 18. After the deductible you pay coinsurance of 10 percent of covered expenses, up to a maximum $500 ... There is no insurance exchange, but Internet comparison sites are available and forms are standardized to minimize switching costs.

Are the policies expensive? Yes. In 2004, 40 percent of households — or one third of individuals — received subsidies. But the country is still struggling with how to handle individuals who fail to comply with the mandate — mainly the poor and recent immigrants.

In theory, insurers compete with each other to bring down prices. In fact, it doesn’t work all that well. There is also enough wiggle room in the system that insurers are able to cherry-pick — to attract enrollees who are good risks and get rid of those at higher risk.

The most important difference is that health insurance in Switzerland is provided by nonprofit insurers — though some are affiliated with for-profit companies that offer supplemental policies along the lines of Medigap in the United States. The basic benefit package is defined by law and is quite generous. Maximum drug prices are regulated.

What is the most important lesson Americans should learn from the Swiss system? You can achieve universal coverage through an individual mandate, coupled with subsidies for people who can’t afford health insurance. But it’s not going to get you cost control unless you enact further measures.