Cantor Pushes Ear Mark Ban, at Least until Republicans are Back in Power.

Rep. Chris Van Hollen tried like hell to hold back his laughter while listening Rep. Eric Cantor, who tried to defend the Republican 10 month ban on ear marks. It seemed obvious to everyone, except the GOP, that the ban would end around the same time Republicans would supposedly take congress back.

Cantor: "There's a reason why we're in the minority now, I think we've tried to learn our lesson here...we took a significant step the other day in our conference, and we said we will not be seeking any ear marks. A total ban...on ear marks THIS YEAR!

Van Hollen: "Your decision was a temporary ban...for eight months." 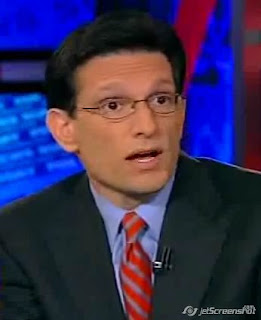 Labels: Lying
Email ThisBlogThis!Share to TwitterShare to FacebookShare to Pinterest