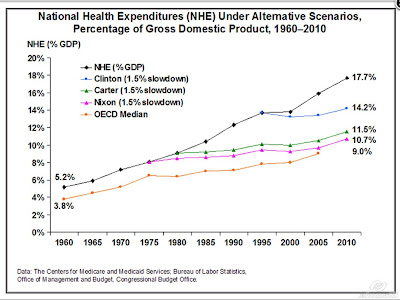 It's not a government takeover of health care, it's a consumer takeover of health care.- Rep. Rob Andrews
The above quote would have been a great way to frame health care reform. But as usual, Democrats demonstrated their marketing incompetence by not selling Americans on this simple concept. But think what would have happened if we were able to pass reform way back in the '70's.
The Commonwealth Fund:

"If President Nixon's health reform plans had been enacted in 1975 and slowed the annual rate of spending by 1.5 percentage points a year, today we would be spending 10.7 percent of GDP on health care. In dollar terms, we would spend only $1.6 trillion on health care in 2010, instead of projected health spending of $2.6 trillion. This savings of $1 trillion in 2010 alone would remove much of the financial burden on families, businesses, and government. Even if Nixon reforms had slowed spending growth by "only" 1 percentage point a year, health spending as a percent of GDP would have been $1.9 trillion in 2010, or 12.7 percent of GDP—a savings of 5 percent of GDP.

The House and Senate bills would begin to bend the curve in total health spending and encourage the development of mechanisms for extending cost control measures more broadly once experience is gained. A recent analysis by the Council of Economic Advisers estimates that private and governmental spending would be slowed by 1.0 percentage points a year."

It's strange how "fiscal conservatives" are the one who prevented us from saving so much of our hard earned money. That includes Republicans as well as blue dog fiscally ignorant Dems.
Posted by John Peterson, Democurmudgeon at 3/16/2010 10:14:00 PM