Anti-Health Care Protester to Parkinson's Victim told, "If you're Looking for a handout, you're in the wrong end of town. Nothin' free over here..."

Tea party protester: "If you're looking for a hand out, you're in the end of town. Nothin' free over here, you have to work for everything you get." All while another protester threw dollar bills in the parkinson patients face shouting, "No more handouts."
Just to fine tune what the anti-health care reform protesters are ultimately pushing for is laid bare by these comments in the following video clip. You want health care, work for it. No charity, no humanity, no compassion or no thought that they too might someday be just as sick someday.
These are the heartless ghouls invading our communities and our political debate.
Rep. Mike Pence's response: "I think that is awful, BUT I think it gives you a glimpse Chris....I had a constituent at a townhall meeting this week, said in Washington DC, do they know upset we are?"
It really is about the protesters, isn't it? 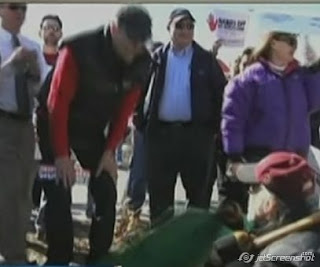