Dump the Cure For NCLB and Listen to Diane Ravitch's Revelation

Getting rid of NCLB sounded like a great plan, but what replaces it might not be much better. What makes it worse is that the supposed cure being proposed is by a Democrat-President Obama. Education historian and former charter and voucher advocate, Diane Ravitch, doesn't like what she's seeing from this administration. eSchool News had this video interview: 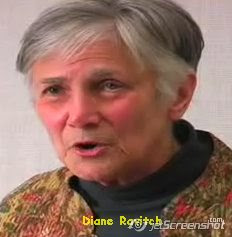 When it comes to education policy, President Obama is repeating the most grievous errors of his predecessor, charge a trio of venerable education policy analysts, including one—Diane Ravitch—best known for her past support of conservative positions on testing, accountability, and choice. Ravitch has a new book out called The Death and Life of the Great American School System: How Testing and Choice Are Undermining Education. Its thesis marks a radical departure from her earlier views on education—and in an interview with eSchool News, she explained what transpired to change her mind.

“This represents a big change for me, because for many years I have been associated with things like testing, accountability, charter schools, merit pay, et cetera,” Ravitch said. “But as I saw the evidence accumulating, I began to think … that I was wrong.”

She added: “The Obama administration, although it promised change when it came to office, in effect has picked up precisely the same themes as the George W. Bush administration, which are testing and choice—and I think we’re on the wrong track.”

Ravitch was one of several education experts who spoke out last month during the American Association of School Administrators’ National Conference on Education against the Obama administration’s continued reliance on high-stakes testing and accountability to drive school reform. Other critics of the president’s policies included Richard Rothstein, a research associate at the Economic Policy Institute and former education columnist for the New York Times, and David C. Berliner, Regents Professor of Education at Arizona State University.

Under the nation’s current accountability system, Ravitch said, “we’re only measuring what we can, and not what matters most.” As a result, she said, we’ve narrowed the curriculum to the exclusion of other important subjects by focusing primarily on making adequate yearly progress in reading and math. If you look at what is working in other successful nations, “it tends to be a far more holistic approach to schooling than what we are doing now” in the United States, she declared.