Suddenly, Republicans are getting death threats by socialist peaceniks! What an idea!

Flipping the blame of death threats against Democrats, as a problem created by Democrats, Rep. Eric Cantor and party big thinkers have again astonished Americans sense of common sense and logic. Cantor's message; don't head off the problem by warning the public. After all, the upcoming midterm election campaign and RNC PowerPoint presentation focused playing up the fear of socialism and loss of our liberty and freedom. Don't talk about the escalating violence and extremist rhetoric from the right wing crazies .

MSNBC's Contessa Brewer starts with Rep. John Barrasso, who continues the heated rhetoric and victimization stoking the tea party death threats, and moves on to Cantor's bizarre leap into reverse reality. I will let Rep. Eric Cantor's shocking upside down "Alice in Wonderland" logic speak for itself (2 min. in): 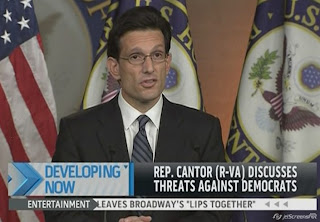 Cantor: "Legitimate threats should be treated as security issues. And they should be dealt with by the appropriate law enforcement officials. It is reckless to use these incidents as media vehicles for political gain. That is why I have deep concerns that some -- DCCC Chairman Chris Van Hollen and DNC Chairman Tim Kaine in particular -- are dangerously fanning the flames by suggesting that these incidents be used as a political weapon. To use such threats as political weapons is reprehensible."

Cantor concluded … releasing threatening messages "can easily fan the flames" and lead to more threats. "Enough is enough, It has to stop," Cantor said.

The message delivered, Cantor could not afford to take questions.

After leveling serious accusations against Democratic leaders, Cantor left the press conference without taking any questions from reporters.

Cantor knew the sludge he just threw at the panting press was indefensible.
Posted by John Peterson, Democurmudgeon at 3/25/2010 11:20:00 AM