It was about time!!!

Thank you Rep. Debbie Wasserman Schultz for throwing Paul Ryan's dystopian economic plan in his face, when he least expected it, on national television.

Ryan's response; not a word.

Despite being shaken by a woman questioning his competence, Ryan moved on to redefine and rename the health insurance premiums we all pay by calling it a...TAX. For Ryan, requiring people to take responsibility and getting insurance coverage, is a... "TAX." Who will stand up for health care freeloaders?

Ryan wants his CBO approved plan adopted, in the worst way, even after it was ripped apart by the Center for Budget and Policy Priorities (see below). Brit Hume leads off the clip with his blissfully ignorant praise: 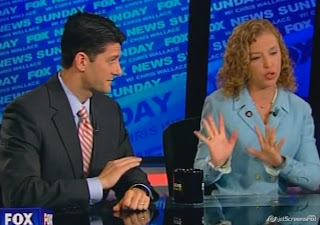 From a recent post about Ayn Randian Rep. Paul Ryan, here's the Center for Budget and Policy Priorities breakdown of his horrific plan:

"The Roadmap for America’s Future, which Rep. Paul Ryan (R-WI) — the ranking Republican on the House Budget Committee — released in late January, calls for radical policy changes that would result in a massive transfer of resources from the broad majority of Americans to the nation’s wealthiest individuals.

"The Roadmap would give the most affluent households a new round of very large, costly tax cuts… At the same time, the Ryan plan would raise taxes for most middle-income families, privatize a substantial portion of Social Security, eliminate the tax exclusion for employer-sponsored health insurance, end traditional Medicare and most of Medicaid, and terminate the Children’s Health Insurance Program. The plan would replace these health programs with a system of vouchers whose value would erode over time and thus would purchase health insurance that would cover fewer health care services as the years went by.

"All in all, the Ryan Roadmap charts a radical course that, if they understood it, few Americans likely would want to follow."