The US under Republican Authoritarian lockdown!

Looking at the many stories I've tweeted and saved as bookmarks, I thought I'd highlight the direction Republicans want to take this country. And since every idea and every law passed is duplicated in all the other red states, it's easier to just list what's out there right now in Florida, Tennessee, Texas, Wisconsin, etc.

You'll notice right away the cruel punishments, the anger, the lawlessness, the lack of actual freedom and liberty contained in the listed issues below don't seem to send up red flags or even faze their agitated voters. And this is with Trump out of office...

1. The “Don’t Say Gay” bill. GOP and B list celebrities are accusing librarians and teachers of “grooming” kids. The heart of HB 800 declares that public and charter schools "shall not locally adopt or use in the public schools of this state, textbooks and instructional materials or supplemental instructional materials that promote, normalize, support, or address lesbian, gay, bi-sexual, or transgender (LGBT) issues or lifestyles. They add up to a law against even mentioning LGBTQ persons or issues. "WHEREAS, the promotion of LGBT issues and lifestyles in public schools offends a significant portion of students, parents, and Tennessee residents with Christian values."

2. A vigilante abortion bill that makes your friends and family $10k if they rat you out. Heck, if you decide to abort your rapists baby, his family and friends can sue you for $10k. Today’s GOP, they don’t believe women are equal.
3. A school funding formula that takes away local control, and is more than 50% rule making we won’t see until AFTER the vote. And counties will love the property tax it will inevitably bring in 3-4 years

4. Tennessee State BOE appointee with no public school experience and evidence he is hostile to public schools. He’s in a lawsuit now as his company sold ammunition to an underage school shooter responsible for the 6th largest school shooting in the country.

5. A local school board in Tennessee banned “Maus,” a book about the horrors of the Holocaust, citing concerns about “objectionable language” and nudity. A school board in Missouri removed Toni Morrison’s “The Bluest Eye,” from its high school libraries. In Texas, an NBC report found that hundreds of books had been pulled from school libraries across the state for review after conservative parents and officials pushed to ban books on race, sexuality and gender.
6. Republican-led bills seeking to prevent students from learning about white supremacy and racism, under the pretense of purging so-called “critical race theory” from classrooms. Texas, Tennessee, Iowa, Idaho and Oklahoma have enacted such laws over the past year, and Republican lawmakers are pushing similar bills in nearly two dozen states. School Official Suggests Teaching Both Holocaust Books And ‘Opposing’ Views.
7. Research shows how, the higher people are on the Christian nationalism scale the more they tend to agree with the statement “we make it too easy to vote.” The same thing happens when people agree with the statements “the best way to stop bad guys with guns is to have good guys with guns,” and “authorities should be able to use any means necessary to keep law and order” and “if national security is at risk, I support torture.”
8. Idaho Lt. Governor Janice McGeachin (R), (who's running for governor) spoke at the recent white nationalist America First Political Action Conference (AFPAC), and insisted she didn’t know anything about Nick Fuentes, the prominent white nationalist who organized the event. On Thursday, the GOP lieutenant governor threw that denial right out the window. “So yes, I did know who I was talking to, who had invited me to speak at that conference.”
9. Republicans Push Crackdown on Crime Wave That Doesn’t Exist: Voter Fraud. Election fraud is exceedingly rare and often accidental. Still, G.O.P. lawmakers and prosecutors are promoting tough new enforcement agents to track down violators.
10. Mason, Tennessee — a majority Black, majority Democratic town — is fighting to protect its sovereignty from white conservatives looking to take control of its economy, a worrying resemblance to the exploitative sharecropping arrangements from the post-Civil War era, when white power brokers ensnared Black planters in deals that funneled most of the profits into white hands. Tennessee’s state comptroller, Jason Mumpower, a Republican, sent a letter to Mason this month calling on the town to relinquish its charter ... be placed under the control of Republican-dominated Tipton County. If the town refuses, Mumpower's office said it will take control. Mason is preparing to welcome a Ford Motor Co. plant to the area, which Tennessee Lookout, a local news outlet, says could be one of the “largest manufacturing investments in the state’s history.”
11. Private Charter Scam and Charade Exposed: Just wait, what you thought Republicans saved you in tax cuts is all going to private businesses called "public schools:"

One more incredible moment: Sen. Rick Scott keeps digging in, but Fox News isn't having any of Scott's "reality." Yup, even Fox can't explain away this one...

"It's in the plan! It's in the plan. But Senator, hang on, it's not a Democratic talking point. It's in the plan" -- even Fox News's John Roberts can't believe it when Rick Scott lies about his own policy plan, which calls for a tax increase on a majority of Americans pic.twitter.com/sa4WgUBgyJ

Smart! Gableman is now the face of the Midterm Elections. 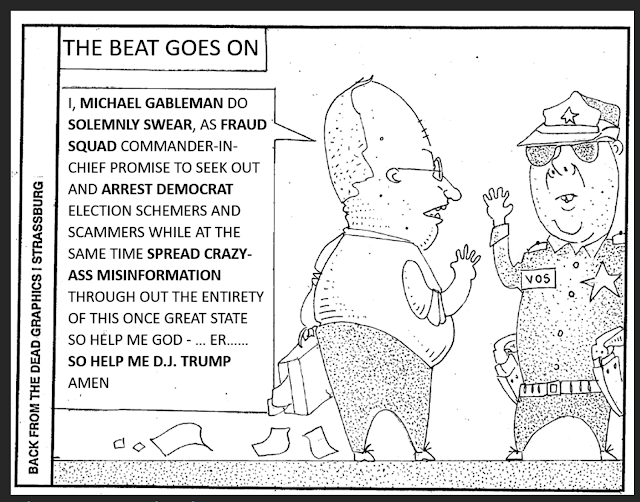 Putin by the Book... 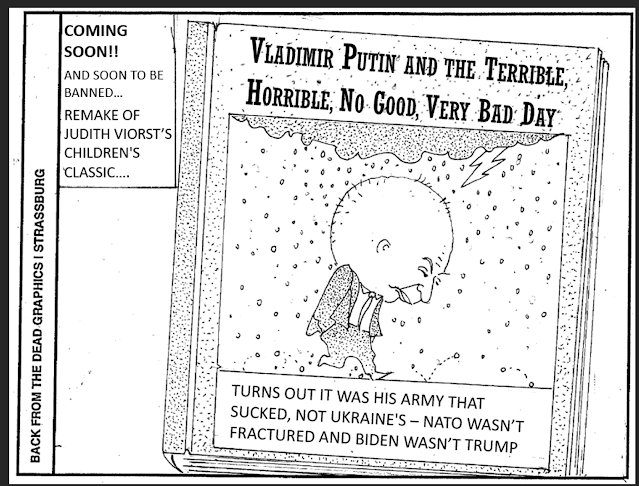 I have reached my peak frustration level with reporters and our very quiet Democratic representatives. And no, "Wisconsin deserves better" press releases are not serious responses.

Just say it, "the Gableman "investigation" is a Trumpian witch-hunt designed as an in-your-face owning of Democratic voters, using their tax dollars, while revving up their base for the midterm elections.

Partisan Example #1-Eric Holder's not so Partisan Redistricting...Bad? Who's partisan. Is it so hard is it to remember all the phony Republican outrage over Eric Holder's attempts to kill gerrymandering? Vos-Republicans accused Holder of political bias. Totally different from the Gableman debacle? Here's a sample of GOP whining from the Journal Sentinel, October 1, 2020:

Gov. Tony Evers' redistricting commission heard from former U.S. Attorney General Eric Holder at its first meeting, as Republicans and Democrats squabbled over whether the panel's work will be tainted by partisanship.

1. "The commission is hardly nonpartisan with (Gov. Scott) Walker recall signers, contributors to political candidates, members of a liberal organization and (a role for) a judge who just endorsed Joe Biden for president," said a statement from Assembly Speaker Robin Vos of Rochester.

2. Andrew Hitt, chairman of the state Republican Party, said having Holder testify made it plain that the commission is stacked for Democrats. “The idea that Governor Evers’ commission is somehow ‘nonpartisan’ is a joke."

There are more than three dozen mentions of Erick Kaardal in the records. Kaardal, a Minnesota lawyer, was referred for possible discipline by a D.C. judge over what the judge considered to be a frivolous that sought to block the 2020 election from being certified.

Rep. David Murphy (R-Greenville) said he disagreed with the notion such close collaboration with Kaardal amounted to a conflict of interest or that it was a sign Gableman hadn't started his investigation with a blank slate. "I don't feel like we're starting from an assumption," Murphy said. "And certainly, as an Assembly committee, I felt totally open to all kinds of evidence and different people's comments."

Members include a former Trump administration official and the head of the Wisconsin Voter Alliance, which unsuccessfully asked the state Supreme Court to throw out the results of Wisconsin's presidential election and force the Legislature to certify the state's presidential electors instead.

Stacked against Biden election? That couldn't be. The team includes:

AP: One of those who will at the meeting with Vos on Wednesday is former Menomonee Falls village president Jefferson Davis. He has organized a pair of rallies at the Capitol attended by Tim Ramthun, a Republican candidate for governor and state representative who has introduced resolutions to decertify the vote.

Davis said he and others will be presenting evidence to Vos that shows there were between 250,000 and 300,000 fake ballots cast in the election and that decertification can legally be done.

“Donald Trump won the state of Wisconsin in such a landslide it’s not even funny," Davis said. ”And we will have the evidence.”

Tennessee public schools, like Wisconsin and every other state, are seeing big money donors finally getting privatization passed thanks to the midterm elections donations.

Seeing an opening created by parent frustration over pandemic school closings and the totally fabricated critical race theory controversy, privatization lobbyists are going to succeed in removing local control and school board control to teach whatever they want.

It's called "school choice," a choice decided by billionaire donors trying to profit from the massive amount of taxpayer money sent to schools.

#1 Story: Informed Patriotism-Trump Style: Newschannel5 has done an amazing job exposing what busy parents haven't had time to investigate for themselves. Is this really what they want?

WTVF: If Gov. Bill Lee gets his way, Tennessee will become a major player in a network of taxpayer-funded charter schools set up by a Michigan college with close ties to former President Donald Trump. Hillsdale's "1776 Curriculum" shows how it wants schools to teach civics. It relies on the 1776 Commission appointed by Trump to develop a "patriotic education" for the nation's schools. Lee calls Hillsdale College's approach to teaching civics "informed patriotism." 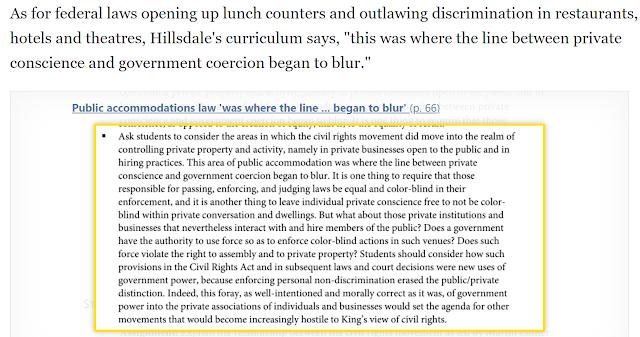 #2 Story: Big Money buying Elections and Privatization of Education: Newschannel5 has done an amazing job. Could it be as easy as choice advocates sincerely being oblivious to what they're really doing, you know, lobbying? That's troubling as hell:

The students are the ambassadors, some as young as seven. "This is an opportunity to put those kids on display and allow us to see all the great things that are happening in the schools," said Maya Bugg with the Tennessee Charter School Center. The children's faces serve as faces for a multimillion-dollar lobbying effort, although the people leading those campaigns don't always like to call it that.
NewsChannel 5 Investigates asked Maya Bugg, Tennessee School Charter Center, "Who is funding this lobbying effort?"

Bugg replied, "So we are a non-profit -- so minimal effort is put into lobbying. We do a lot of education. We educate legislators about the issues."

The truth is the Tennessee School Charter Center employs a big firm that calls itself "Tennessee's Lobbying Powerhouse." They received funding from billionaire Bill Gates and the Walton family of Walmart fame. So far, NewsChannel 5 has counted at least 61 registered lobbyists on the school privatization side, compared to just 17 lobbying for traditional public schools.