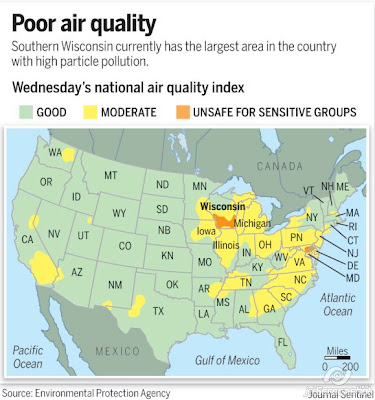 I know, I'm sounding like a broken record (a circular vinyl device containing sound recordings), but breathable air is just as important as problem of climate change.

jsonline: Southern Wisconsin had the largest mass of problem air pollution in the United States on Wednesday. And Tuesday, Milwaukee was hit by the highest concentrations of particle, or soot, pollution in the state - nearly reaching a government threshold where air was considered polluted enough to potentially harm healthy people, those with heart and lung disease, older adults and children. But Tuesday, soot levels in Milwaukee flirted with moving into the rare classification of red, where the air can cause health problems for healthy people.

The culprit has been a combination of weather and a complex mixture of microscopic particles and liquid droplets from power plants, factories and other sources that float in the air and can lodge in people's lungs. It was the largest such area in the country.

So how much are corporate polluters contributing to your health care problems, and are they paying for the cost of treating victims of their business externality?
Posted by John Peterson, Democurmudgeon at 3/11/2010 02:49:00 PM