How easy is it to beat down the American public? Very, a new Harris Poll Shows. 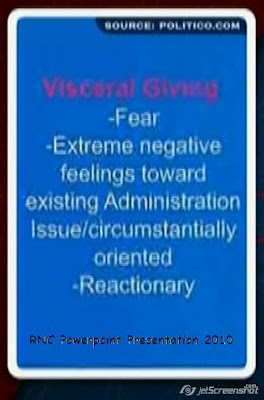 The RNC PowerPoint campaign presentation promoting "fear, extreme negative feelings toward administration issues, (and) reactionary" revealed what has always been their approach to gaining power and governing, and the public feels their "fear." It has been an overwhelming success, according to a new Harris Poll, and each one of the low points in public confidence has been a GOP target for years:

azcentral.com: The bad news for Congress is that the latest poll found that just 8 percent of Americans said they have confidence in lawmakers' leaders - the same figure that Wall Street earned. Congress ranked below law firms and the media (both at 13 percent) and organized labor (14 percent). The index, between Feb. 16 -21 2010, showed declines in most institutions, including the White House. Those who said they have a "great deal of confidence" in the White House fell from 36 percent to 27 percent.

The vilification of intellectualism as elitist and out of touch, along with the politicization of religion, have even damaged these institutions:

It wasn't just political institutions that felt the sting of less popularity. Higher education fell from 40 percent to 35 percent and organized religion dropped from 30 percent to 26 percent.

Without an equally strong opposition party, like the weak kneed Democrats who are refusing to push back with gut check visceral ideals of their own, the "ownership society" members will succeed in advancing their agenda of more guns, free unregulated markets and a conservative activist supreme court like we've never seen.
Posted by John Peterson, Democurmudgeon at 3/10/2010 10:03:00 AM