New Rule for Radio and TV hosts: Guests who lie are not invited Back.

Tired of the "both sides do it" lie that seems to be so eagerly excepted by media news? Ed Schultz ripped apart "the BIG LIE" from yesterday below. Let's start with the "both sides" camouflage whipped up by Republican Rep. Eric Cantor.

ThinkProgress: Yesterday, House Minority Whip Eric Cantor (R-VA) falsely charged that his office was “directly threatened” in a gun attack. Cantor used the incident to provide partisan cover to his unruly GOP colleagues, who have been pandering to tea party activists with increasingly unhinged and extreme rhetoric. 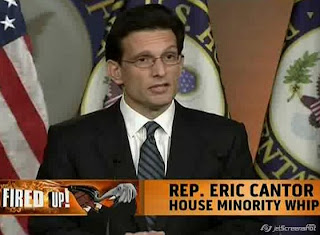 The quick aside by Schultz was this; He wondered by he should even try to have any Republicans on his program, since they all lie.

I would go one better; Put in place a rule where any guest who lies, whether it's the over the top fictional "what if" scenario or just outright BS, is never invited back on the show. This wouldn't include half truths, where only a few well chosen facts are used to spin the issue in a way to benefit the guest. The host is expected to know something to balance the conversation.

Remember, even the wacky politicians are looking for on-air time and can't afford to lose face time. It would also help to have in place a basic expectation of quality and truth.
Posted by John Peterson, Democurmudgeon at 3/27/2010 01:04:00 AM