Unlike Rep. Ryan's Free Market Ideology, Democrats are only Concerned about Their Political Philosophy?

Rep. Paul Ryan, the wonkish Republican numbers man blinded by an ideology pushed by the ruthless Ayn Rand, started screaming bloody murder over "tax increases" in Obama's health care reform bill. These were numbers no one could refute, because they came right from the non-partisan Joint Committee on Taxation. That's the same committee that concluded:

"the Ryan plan would produce hundreds of billions of dollars-a-year less than that—about 16.8 percent of GDP—a decade from now, according to new Tax Policy Center estimates. Moreover, the plan would give a huge tax cut to the wealthy, while cutting taxes by little or nothing (and in some cases even raising taxes) for low- and middle-income people. As a result, Ryan would likely fall far short of meeting his goal of balancing the budget and paying off the national debt by 2080, even if government spending were slashed to 1951 levels as he proposes.

Fox News was lucky enough to land an interview with Ryan on the same day this devestating news crushed Paul's Road Map for Americas Future. So of course they talk about... Obama's tax increases. I guess Megyn Kelly ran out time before she could console Ryan over his failed road map con. 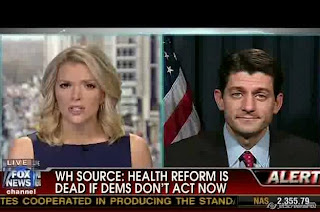 Paul Ryan said pretty much the same thing to Greta:

“And, I really think it comes down to a political philosophy. And they believe in a political philosophy that is more like a cradle to grave, more of a social welfare state, kind of like you see in Europe versus the American ideal that we’ve known and loved and grown up with. And, so really what this is more about is ideology than health care policy.

Ryan's Ayn Randian philosophy and Dickensian economic model isn't the driving force to privatize everything in his utopian free market system of health care? Odd too there was no mention of the Joint Committee on Taxation's shredding of Ryan's plan.

Note: Below, the right wing think tank Heritage Foundation uses the old "it'll just be passed on to families" excuse to criticize Obama's tax increases and limited deductions like

applying the Hospital Insurance (HI) portion of the payroll tax to investment income for the first time. This would be a dangerous break with past precedent and would slow economic growth at the worst time.

Any proof that it would really slow economic growth? Who created the "worst time" to do dig ourselves out of this mess? Maybe we should do nothing, except stand around like Republican "deer" in the recessions "headlights."