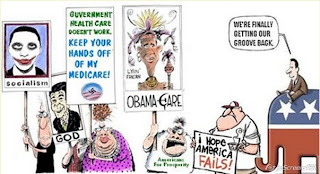 Why are they so angry? Obama save American with their tax dollars.
Republicans and tea party protesters will never get over spending their money to save the economy from slipping into another Great Depression. It's an odd reason to be so angry; spending money, especially on a government they hate so much. It's a big loser for Democrats too, because no one can say with absolute certainty, that we would have had a great depression.
Playing on the incredibly remote possibility that doing nothing would have brought us to the same place we're at now, Republicans and tea party fear mongers are setting up the next election as the saviors who offer nothing.
Except for the words "freedom" and "liberty," they've got nothing. Bashing the same CBO they are now pointing to praising Rep. Paul Ryan's "Road map to a Dickensian American Future," the conservative alternative reality doesn't see the inconsistency, because all contradictions have been erased from their thinking.
According to the February 23, 2010-Congressional Budget Office report:The economic stimulus package "created or saved" between one million and 2.1 million jobs, with another 400,000 or so to follow. The USA Today's headline: "the stimulus has been so effective...that it casts doubt on whether Congress should even bother with a new one."
But the CBO report can't be "certain" (except on Ryan's plan). After running on the platform of health care reform and energy independence, conservatives are still acting surprised Obama is springing his agenda on them, especially at a time when the economy is in recession.
But when you've got no where else to go but up, isn't that the best time to revamp the current dysfunctional system?