MAGAs afraid to tell Parents they shouldn't let their kids attend Drag Shows! So much for Parental Rights agenda.

(Note: I will soon be changing the format just a little here, after YouTube decided to threaten my blog with cancelation for not adhering to their new community standards...retroactively. They're actually canceling posts 15 years old based on age appropriateness and supposed misinformation by pointing out GOP lies.)

1. Shifting Parental Responsibility to...Business? Drag Shows are Hot: A little-noticed thing is going on, and reporters are missing it; While MAGAs are demanding parental rights, they are actually shifting parental responsibilities to businesses. Nice trick.
For example, word salad radio cancer Vicki McKenna is either devoid of insight or is being embarrassingly obvious in her intentions to use children as right-wing cannon fodder. Notice the event below was attended by children and their parents. Or were these kids just out wondering the streets: 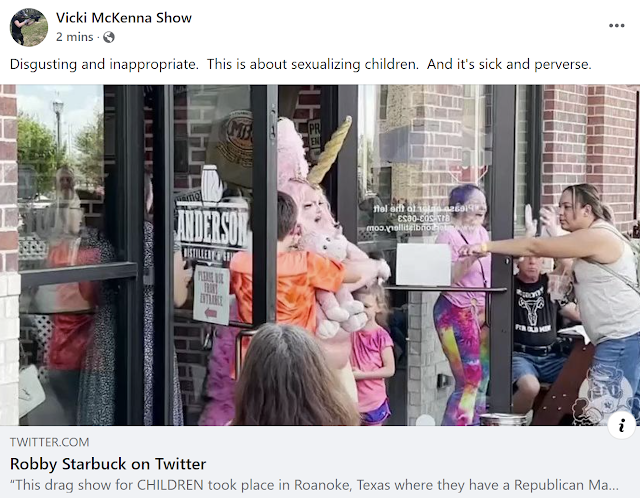 Come on MAGAs, tell parents they're bad and that they don't know how to raise their children.

2. AR-15s look scary to snowflake MAGAs if ANTIFA has them. Are MAGAs so dumb they don't see the double standard? Oh yea, MAGA McKenna now thinks parents do matter, but only if they're protesting drag shows:

BONUS: Desperate MAGAs hope Hunter Biden story shows Joe Lied once: The totally inconsequential Hunter Biden story, and not Trump's 2 impeachments, his plan to flip of the US election, and scheme to cause the insurrection, is still being rabidly pursued. Here's MAGA McKenna just putting it out there...

Note: Shame on CBSNews for copying and pasting this headline from right-wing fake news sites.

Because MAGAs only read headlines, they're sure to miss the obvious twist:

Timothy Thibault, a top-level FBI agent resigned late last week and was walked out of the FBI

But these officials also said that Thibault had reached retirement age, and they added that all of those who retire hand over their badge and gun and are escorted out of the building.

No real story. But that won't stop them... here are the gibbering disconnected ramblings of Chuck Grassley:

Thibault had recently been removed from his position ... Thibault came under fire earlier this year from Republican Sen. Chuck Grassley who had accused him of "improper conduct" in the Hunter Biden investigation, alleging that Thibault had tried to close the probe. The probe ... is ongoing.

It never closed so where's the story? Way to stay on top of these important stories MAGA McKenna.

Trump's pursuit of the one-armed man he claims gave him the boxes... 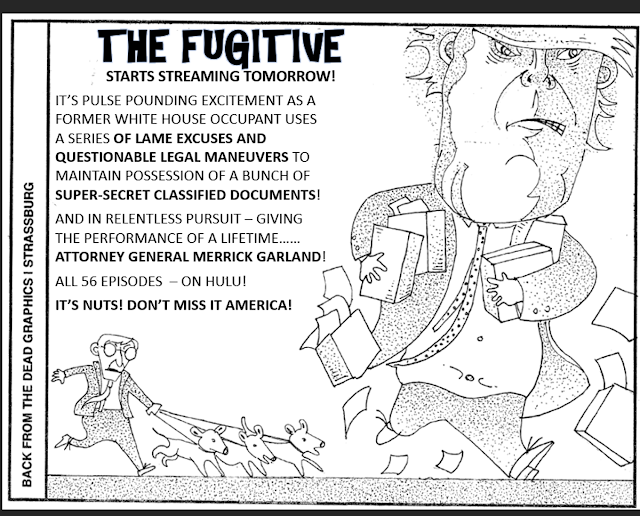 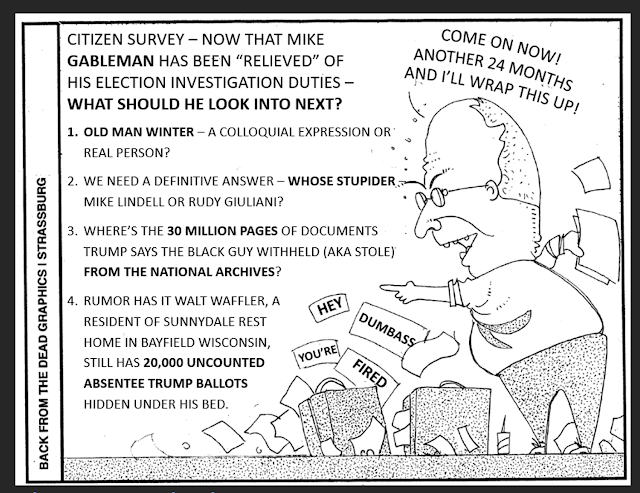 The arrogant Johnson opens his trap!

From the beginning, it has always been Dumb Ron Johnson for me. He ran to repeal the Affordable Care Act. He didn't know the old "free market" system killed and bankrupted people. Reform seemed like a good option, especially when it guaranteed preventive care and treating preexisting conditions. The horror. You've got to be pretty dumb to object to that.

By the way, a Texas case is about to blowup preventive care. I'm not kidding. This is the next big fight:

This midterm, Johnson is now a MAGA spewing empty vessel, attacking Democrats for every wholly created fake problem his fellow bottom feeders have created. Trashing and talking down America, for them, is uplifting and energizing. 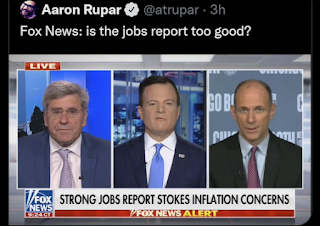 Biden, like Obama, is hearing the same Republican trash talk about he caused the COVID economic recession. Republicans did this with the Great Recession. Republicans have never acknowledged how COVID gave us supply chain problems, shortages, and an oversupply of gasoline due to business shutdowns.

Johnson admits Republican want to End Medicare and Social Security: Ron Johnson may be dumb, but he knows the Senate is a place where legislation dies, so why not kill Social Security and Medicare the same way, or at least poison pill the programs so they can't pass.

On the same day Johnson reverses course and supports a bill to expand health benefits to veterans, he indicates a willingness to make all benefits discretionary—translation: left to whims of politicians having to vote each year to leave alone, expand, or slash. https://t.co/zVXjs3xXva

Johnson previously expressed support for a plan by colleague Sen. Rick Scott (R-Florida) that also would have forced Medicare and Social Security to face elimination,

“Putting Social Security and Medicare on the chopping block is literally the only concrete economic idea I’ve heard from Republicans in Congress this year. Rick Scott, the RSC, Ron Johnson. But of course they’d never do it, like they’d never overturn Roe,” said Jesse Lee, a senior advisor to the National Economic Council. The NEC advises the president on economic policy, and is part of the White House.

“You know that money you’ve paid all your life out of your paycheck for Social Security & Medicare? @SenRonJohnson wants to steal your money and potentially cut benefits from both. That’s a more extreme position than almost anyone in the U.S. Senate.”

Johnson said Health Care is a Privilege: Johnson became a Senator so he could repeal the ACA. Like all Republicans, Johnson wants politicians to make medical decisions:

JOHNSON: “What drives me nuts is when I’m challenged by medical experts. [Laughs] Okay, show me the data. The one that’s driving me nuts right now is this sudden adult death syndrome.”

He received no blowback from Republican voters when he came right out and said that it's a privileged to get health care:
In the clip, Johnson echos those famous last words Mitt Romney said that tanked his chances for President:

Johnson is so hell bent on playing doctor, that he vented his anger on diabetics by making them pay full price for their insulin:

These MAGA Republicans voted against capping insulin at $35 a month. Shameful. pic.twitter.com/r55URHeCy1

Health care is also being used to force people into jobs they hate. If you're really sick, get a job. That's what Governor candidate radical Rebecca says:

Remember today, that health care is gov "welfare," a totally optional thing for the privileged. Make 'em work for it... pic.twitter.com/SDBTx1sdEa

In March of 2021, additional funds were appropriated through the American Rescue Plan Act.

Here's a summary of Johnson's response;

The "radical leftism, "complicit and corrupt media (Johnson is saying this on conservative only AM talk media)," "people who want to fundamentally transform this country," "open borders," "record gasoline prices" etc.

What does that all mean? And don't get me started on DeSantis' creeping fascist makeover of Florida.

This is an Election Year MAGA platform, and their alt-news viewer voters don't even know it's happening.

I thought her summary of what MAGA Republicans are FOR and AGAINST is an amazing platform meant to win their elections.

What did the vast majority of Republicans vote against? It’s gobsmacking:
For any member not representing a deep-red district or state, many of those votes are not only problematic but indefensible.

What and whom are Republicans for? According to their votes: forced birth, protecting big corporations and tax cheats from paying taxes, the National Rifle Association and Second Amendment absolutists, oil companies and Big Pharma, to name a few things. The ties that bind them — aversion to lifesaving coronavirus vaccines, election denial, censorship, reverence for the Confederacy and persecution of LGBTQ Americans — used to be considered beyond the pale. Now, they are standard positions.
Posted by John Peterson, Democurmudgeon at 8/08/2022 03:54:00 PM 0 comments

Arizona decided a child's education is ripe for experimentation by throwing the responsibility of learning to parents, giving them the power to spend taxpayer money on whatever kind of education they feel good about. What could go wrong? The scheme is obvious; blow up public schools. But parents will someday find out that their vouchers will not cover the tuition costs schools will eventually jack up, because they can. Surprise!

When a school loses their accreditation, they will lose out on federal and state funding. In addition, a college or university may not recognize a diploma or credits from an unaccredited high school. Students could be denied admission to colleges and universities and/or may be required to take remedial courses to make sure they are on track. Students of these schools will also be ineligible for scholarships when preparing for college.

The state board of education downgraded the accreditation for Tulsa Public Schools, Oklahoma’s largest district, because of a teacher’s complaint about staff training on implicit bias, which the teacher claimed “shamed white people.”

There is a lawsuit trying to stop HB1775, this anti-critical race theory law, saying it's vague and overbroad, and impinges upon freedom of speech. I would think you would have to show actual harm, including a negative impact on student learning, which would seem impossible to prove.

Republican lawmakers in more than 40 states have proposed some version of Oklahoma’s law.

Insane and utter nonsense is now being used to punish educators, like this...

Board member Brian Bobek, who proposed the harsher demotion, said downgraded accreditation was warranted because whoever took Tulsa’s implicit bias staff training is now going to be potentially biased.

Huh? Potentially, but maybe not? Oh, it's gets more ridiculous and again, impossible to prove this had any kind of negative outcome:

“We’ve seen this district—not only with 1775 but in other ways—violate the opportunity for the students to get exceptional quality education,” said another board member, Estela Hernandez. “Accredited with warning is sufficient in this case, because we need to send a message.”

Here's an example of "implicit bias" training that will negatively impact a student's learning:

The slide show audio (for teachers) included an overview of racial biases, how they were shaped by history and are present in classrooms and how they can impact student learning and outcomes if left unchecked. It also included statistics, noting, for example, that Black students with disabilities are more likely to be suspended or restrained, and that teachers hold lower expectations (explicitly or implicitly) for Black and Latino children as compared to White peers.

Board member Carlisha Williams Bradley emphasized the difference between implicit bias training and someone being inherently racist. “Implicit bias is something that we all have. The teacher who complained stated that this was specifically speaking to white people. But in this training, what I see is that it also explicitly states that we all as individuals have implicit bias. It’s not inherent by nature, but it is based upon our lived experiences,” she said. It is clear there is no statement or sentiment pronounced that people are racist—due to their race or any other factor. We would never support such a training.”

Mustang Public Schools also had its accreditation downgraded to “accredited with warning” after the district internally investigated a complaint made in January against a teacher who asked students; “If you have ever been called names regarding your race, socioeconomic class, gender, sexual orientation, or physical/learning disability and felt uncomfortable, take one step back.”

The district determined that the team-building classroom activity had violated the tenet of the law that prohibits teachers from making students feel “guilt or anguish.”

Prove Harm! I'm assuming a legal judgement would depend on proving that it caused actual harmed. That would be the only way to make sure government can't just make things up with imagined threats and hurt feelings.