The Vilified Lewin Groups "The Path to a High Performance U.S. Health System" Offered Up Bad News For Insurers, Anger from Liberals. 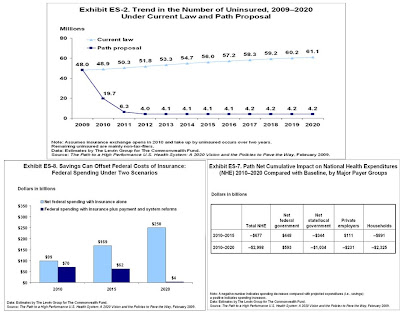 Remember the much maligned Lewin Group, a subsidiary of the evil UnitedHealth Group, that put out a detailed analysis of health care reform with a public option back in 2009?

I'm having a hard time finding a reason why we didn't embrace their report. I'm also wondering why UnitedHealth Group didn't close them down in the process after seeing their shocking numbers. From their own report, a liberal vision of a utopian health care system that would have begun in 2010, here's a look:

Click image to enlarge:
The Path to a High Performance U.S. Health System proposal would achieve near-universal health insurance coverage by: expanding Medicare and Medicaid; requiring employers to contribute to the cost of coverage; creating new premium subsidies; and establishing regional connectors that provide a selection of health plans to consumers, including a new public plan.

The program requires employers to either provide coverage or pay a fee that would be used to finance coverage for the uninsured. It also expands the Medicaid program to cover all adults living below 150 percent of the federal poverty level (FPL) and provides premium assistance to uninsured people with incomes too high to qualify for Medicaid, but to low to afford coverage on their own.

The program also creates a new coverage option under Medicare called Medicare-Extra that provides expanded benefits for Medicare enrollees. It eliminates the waiting period for Medicare disability coverage and it permits individuals and employers to buy coverage through a new public plan modeled on Medicare.

All Americans are required to have insurance. To assure the affordability of coverage, Path provides a subsidy for premiums in excess of 10 percent of income (5 percent for those in the 15 percent or less tax bracket). People who do not provide proof of coverage with their income tax return are automatically enrolled in Medicaid of the public plan, depending on their income, and the individual is assessed for the premium amount, net of the subsidy they are eligible to receive.

Transitions resulting from the path proposal assuming it is fully implemented in 2010.