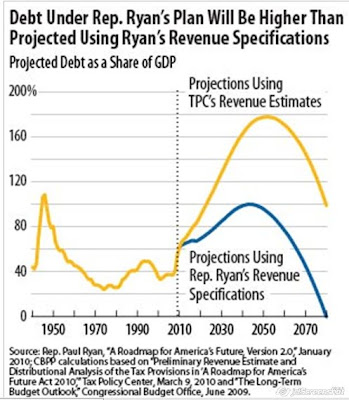 My fingers are still sore writing as much as I do about Ayn Randian Paul Ryan, so I'll let the real tax policy experts say what I've been saying all along. Center for Budget and Policy Priorities:

"The Roadmap for America’s Future, which Rep. Paul Ryan (R-WI) — the ranking Republican on the House Budget Committee — released in late January, calls for radical policy changes that would result in a massive transfer of resources from the broad majority of Americans to the nation’s wealthiest individuals.

"The Roadmap would give the most affluent households a new round of very large, costly tax cuts… At the same time, the Ryan plan would raise taxes for most middle-income families, privatize a substantial portion of Social Security, eliminate the tax exclusion for employer-sponsored health insurance, end traditional Medicare and most of Medicaid, and terminate the Children’s Health Insurance Program. The plan would replace these health programs with a system of vouchers whose value would erode over time and thus would purchase health insurance that would cover fewer health care services as the years went by.

"All in all, the Ryan Roadmap charts a radical course that, if they understood it, few Americans likely would want to follow."

Rebuttal to Ryan attack on his plan.