Europe's High Academic Standards Can't Complete with the Likes of Texas and Alaska, who have a Better Idea...Teaching Ideology 101. 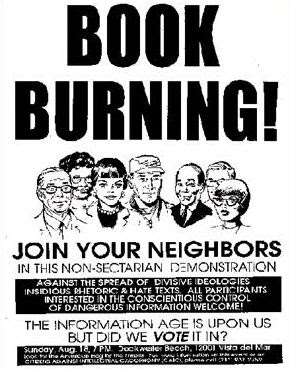 I ran across a recent libertarian blog, that again, advocated the adoption of the Swedish school voucher system while never mentioning the tough national "big government" curriculum and standardized test every school is required to take.

Perhaps that's why the nation's governors and state school superintendents are talking about putting in place a national U.S. academic standard for math and English. If it works so well in the higher scoring European nations, why not here? Because, say dissenters like Alaska and Texas:

NY Times: Alaska and Texas are the only states that declined to participate in the standards-writing effort. In keeping his state out, Gov. Rick Perry argued that only Texans should decide what children there learn.

With an attitude like that, and the well publicized attempts to inject a more conservative agenda into the process, why hasn't the national media called into question letting the Texas school board set national standards for public school text books? Are they afraid they might be called the "liberal media?" Yes. How else can you explain the media ignoring these facts:

The Texas school board was going in a different direction, holding hearings on changes to its social studies curriculum that would portray conservatives in a more positive light, emphasize the role of Christianity in American history and include Republican political philosophies in textbooks. Don McLeroy, a dentist from College Station who heads up the board’s conservative faction … still has 10 months to serve and he, along with rest of the religious conservatives on the board, have vowed to put their mark on the guidelines for social studies texts:

Conservatives argue that the proposed curriculum emphasizes the accomplishments of liberal politicians, like the New Deal and the Great Society, and gives less importance to efforts by conservatives like President Ronald Reagan to limit the size of government.

One guideline requires publishers to include a section on “the conservative resurgence of the 1980s and 1990s, including Phyllis Schlafly, the Contract with America, the Heritage Foundation, the Moral Majority and the National Rifle Association.”

One amendment states that the (civil rights) movement created “unrealistic expectations of equal outcomes” among minorities.

Another proposed change removes any reference to race, sex or religion in talking about how different groups have contributed to the national identity.

The amendments are also intended to emphasize the unalloyed superiority of the “free-enterprise system” over others and the desirability of limited government … publishers should “describe the effects of increasing government regulation and taxation on economic development and business planning.”

References to Ralph Nader and Ross Perot are proposed to be removed, while Stonewall Jackson, the Confederate general, is to be listed as a role model for effective leadership, and the ideas in Jefferson Davis’s inaugural address are to be laid side by side with Abraham Lincoln’s speeches.

Offer … more planks to highlight what they see as the Christian roots of the Constitution and other founding documents.

Many other people came to the meeting to support the conservative slate of amendments, including some people enraged at what they saw as socialist tendencies in Washington. One man asserted that the Tea Party movement should be included in the textbooks.

Remember when "Gov. Rick Perry argued that only Texans should decide what children there learn."

I'm okay with that. Just keep this right wing radicalism within the Texas border please.

It would also be wise for the national press to call Texas' efforts into question for trying to rewrite history in our nations public schools, and tell them they can put their politicized text books... in the fiction section.
Posted by John Peterson, Democurmudgeon at 3/11/2010 10:42:00 AM