The Election is all about JOBS! So Say Republican Primary Candidates, When they're not arguing about gay marriage. 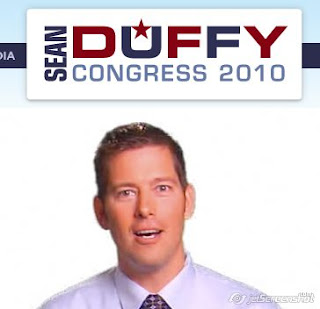 Wisconsin State Journal: A GOP challenger in a northwest Wisconsin congressional district is condemning his primary opponent and former reality television star for having appeared in a movie dealing with gay marriage. "I will not keep quiet or look the other way on these issues. It is in my heart and in my soul and I cannot keep still," Dan Mielke said in a statement about his opponent Sean Duffy. Mielke said Duffy's appearance in the movie amounts to condoning gay marriage and goes against conservative principles. Mielke's site states, " Sean and Rachel both participated in has an admitted long history of promoting acceptance of the homosexual lifestyle."

Duffy is the Ashland County district attorney and a former cast member of the MTV reality show, The Real World. He said "The film my wife and I participated in 11 years ago was a mockumentary - a spoof of reality television. Mielke's … latest attempt to smear my wife and me is shameless, and a clear indication he is grasping at straws."

Jobs, jobs, jobs...How did Duffy's wife get "smeared?" This is almost too surreal to believe:

WISCNEWS: Rachel approached Mielke's booth … Mielke said Rachel tried to rip a duct-taped label, which described the video, off his table. Duffy spokesman Darrin Schmitz said, "He responded by violently grabbing her by the arm. She’s 5-feet tall and eight-and-a-half months pregnant and is a threat to no one, including someone twice her size. "She was getting ready to rip them off," Mielke said. "I stopped her and pushed her hand off the tape..." After the argument … Mielke said then he called police to document the incident. Schmitz said the call was an abuse of the 911 system and "a publicity stunt to save his failing campaign."

Officer Brion Stecky spoke with Mielke … Mielke suggested he put a piece of paper with "view at your own risk" over the computer screen so only people who wanted to see the video would see it.