After the disappointing debut of the iPad, no flash player, mic, web cam, USB...etc, I was hoping someone would put out a e-reader with the common "must have" features listed above. I think HP's Slate is the answer.

HP released a video introducing its tablet called the Slate that will run Windows 7 operating system and support Flash — a jab at the iPad, which will not display Flash-based sites or videos.

HP did not reveal pricing or availability for the device, though it has indicated the Slate will be available this year.

Though HP has not released the specs yet, the company’s video shows a device that’s closer to the 9.7-inch display iPad in its design and size. HP’s slate seems to offer a full capacitive touchscreen and the familiar pinch-to-zoom gesture. Overall, the design resemblance to the iPad is startling, so the Slate could clearly be a tablet for those who want an iPad-like device on the Windows ecosystem.

The Slate has icons that lets users quickly access the browser and apps such as Pandora and the music player. And like the iPad, it will also display digitized versions of magazines and newspapers.

As you can see in the picture below, the Slate is held sideways and showing a web cam video, which might mean is has a built in web cam and mic for two way Skype calls. I can only hope. 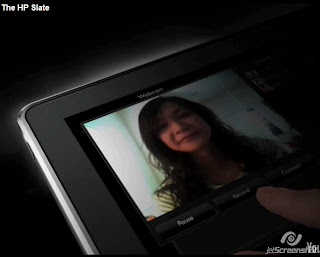