We know Scott Walker broke his outrageous campaign promise to create 250,000 jobs, THE big lie that won him an election, because of the state's last place position in job creation in the Midwest.

But PolitiFact decided to split hairs with a big “Untrue” rating for Burke, who insisted Walker was still last.

For the first three years of Walker’s term, Wisconsin did rank last in the Midwest -- both for the three years as a whole, and in each of the individual years. That’s a true statement, and we have rated it as such … this claim from Burke has remained stuck in the past … ignores the most recent 12-month performance -- a common yardstick for economists -- that says Wisconsin’s performance improved and was better than two other Midwest states. We rate the claim False.

But if we want to be completely accurate about Walker’s “performance improvement,” is would be helpful to include the fact that Walker’s performance DIDN’T improve after all: 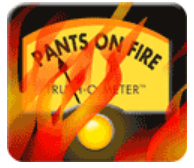 The state's job-creation pace was virtually unchanged from the previous quarter, when Wisconsin added jobs at a rate of 1.27%. Its rate during the latest period surpassed neighboring Illinois and Minnesota, however, because job creation in those two states slowed.