New Study undercuts Walker's hope for high wage jobs: "Net Job Growth in Wisconsin has been in the low-wage category!"

One of the most insulting comments made by our normally detached governor Scott Walker about the minimum wage has yet get the kind of blowback it deserves.

We're supposed to be happy with Walker wish that everyone could find work that is pays 2 or 3 times more than the current minimum wage. And I wish everybody will someday win a lottery or find a pot of gold at the end of the rainbow.

It's the most insulting, and dumb response ever, left alone by the media who treated it like a serious solution. A wish for prosperity is not a plan!

But wages are going the other way, and it's not a coincidence that Walker is slipping off to the side the real and looming problem. jsonline: 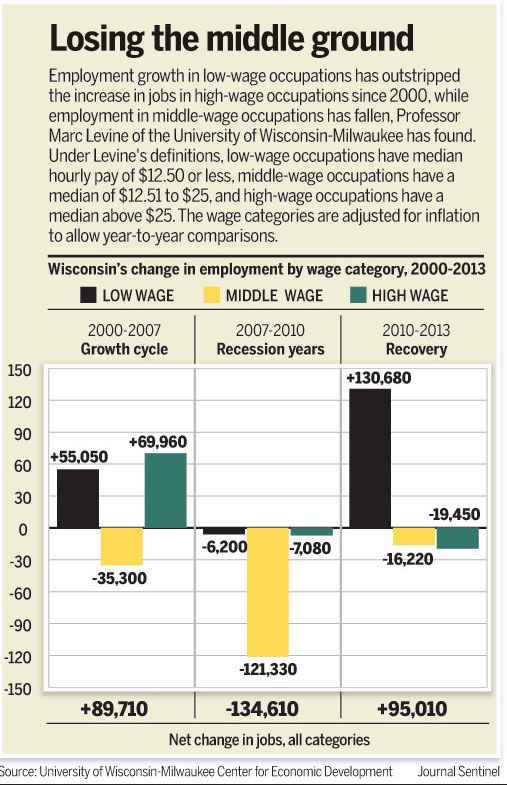 "Since 2010, the recovery has been extraordinarily heavily weighted — all of the net growth in Wisconsin has been in the low-wage category," Levine said.

If that doesn't get Walker's attention, which it won't, maybe this wake his voters up:


Some of that growth is from newly created low-wage jobs. But the lion's share has come from middle-wage occupations dropping into the lowest tier as their pay fell in inflation-adjusted terms. The May 2010 to May 2013 period overlaps the administration of Republican Scott Walker, whose economic performance Levine sharply criticized in an opinion article in late June. The current study does not mention Walker.

Abdur Chowdhury, an economics professor at Marquette University, said in an email that Levine's Wisconsin study "confirms what we have found for the U.S. national economy.""Since the Great Recession, and especially over the last few years, wage growth has been relatively flat. This has happened while several million jobs have been created. This indicates that the jobs have been mostly in low-skill, low-wage areas."