Hillary Clinton stirred up a bees nest dissing trickle down, supply side economics.

In the most stunning and amazing example of “projection,” ever, I was directed by an anonymous conservative in the comment section to this website that supposedly offered a rebuttal to Hillary. The clueless GOP base is actually described perfectly in the article.

What conservatives don’t understand is, wait for it, is consumer DEMAND. Consumers have all the power. But the wealthy elite and corporate CEO’s, marketed as “job creators,” don’t want the riff raff to know that they need us desperately, and depend on demand.
Projection? See if you agree. It’s jaw dropping Bizarro World supply side stuff that doesn't offer one solid fact or rebuttal. Just name calling. It's laughable stuff:

Hillary — Are You Ignorant, Stupid or Just a Demagogue? Ignorance seems to be overwhelming everything. Nowhere is that more apparent than in basic economics. The political class uses economic ignorance as the basis for wild claims. So where do jobs come from? Do they just happen, sort of like Ebola? Or, as many politicians would want you to believe, are they created by government? Clinton’s statement above is dependent upon extreme ignorance, or even plain stupidity. If she truly believes it, then she is stupid. (With her background, it is impossible to claim she is ignorant.) Thus, for her to issue such a statement reflects either stupidity or duplicity. Either, in my opinion, disqualifies someone from my vote … If it doesn't represent stupidity than it is demagoguery of the worst kind. Neither deserves voting support.

Let's take a shot at public education for not teaching trickle down economics:

Sadly, ignorance regarding basic economics … we can thank our public schools. Just as Catholic schools do not teach the Muslim religion, government-run schools do not teach free markets. Perhaps it is no accident that the declining school standards are not corrected. Neither political party seems concerned with remedying the process which converts the raw material of our future into functioning citizens.

Yea, my kid is a “raw material.” Wow. I know, it’s truly beyond outrageous. Here’s projection that goes off the Richter scale:

As in so many other aspects of government, H. L. Mencken appears to have gotten it right: The demagogue is one who preaches doctrines he knows to be untrue to men he knows to be idiots. In the great predatory game of politics, it is the citizen who is the prey.

Would it be stupid to compare the number of working Americans just before the Great Recession to the jobs situation right now? Of course, but it’s a trick conservative minds won’t pick up on: 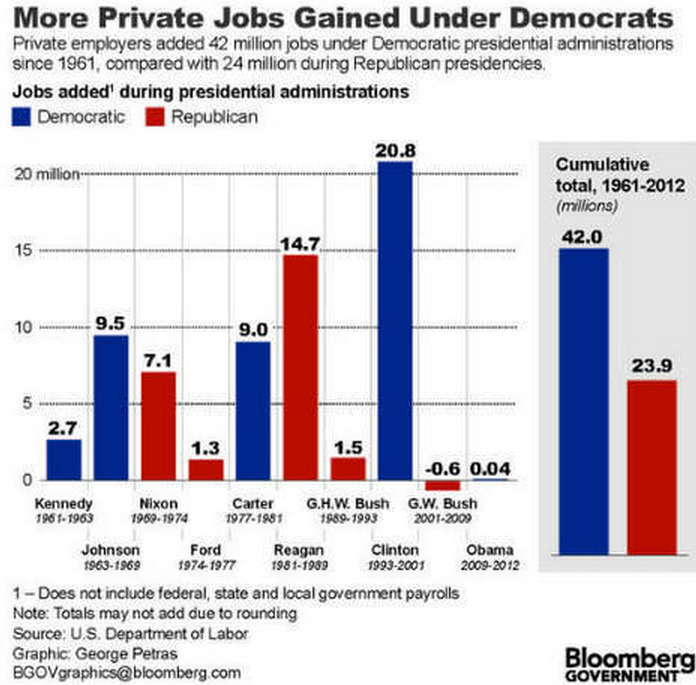 The fact that Clinton added nearly 21 million jobs is somehow lost in the mix, while later they did mention Reagan’s total. Funny thing isn't it? And CNN embarrassed themselves:

CNN host John King presented Clinton's comments as a fumble "a little reminiscent there of Mitt Romney saying corporations are people, too," and USA Today called the comments "An odd moment from Hillary Clinton on the campaign trail Friday - and one she may regret."


"One of the things my husband says, when people say, what did you bring to Washington? He says, well I brought arithmetic. And part of it was he demonstrated why trickle down should be consigned to the trash bin of history. More tax cuts for the top and for companies that ship jobs over seas while taxpayers and voters are stuck paying the freight just doesn't add up."

Here's the argument for "demand:"


U.S. economic growth has historically relied on consumer spending, and middle class consumers are "the true job creators," Nobel Prize winning economist Joseph Stiglitz points out. Right now, the U.S. economy is "demand-starved," as Economic Policy Institute's (EPI) Joshua Smith puts it. Steiglitz says that, of all the problems facing the U.S. economy, "The most immediate is that our middle class is too weak to support the consumer spending that has historically driven our economic growth."

Labels: Hillary Clinton, Supply Side Economics, Trickle Down
Email ThisBlogThis!Share to TwitterShare to FacebookShare to Pinterest