Republicans promise to save us from their own Crisis to Crisis policies. Thanks?

“We're going to go after them on healthcare, on financial services, on the Environmental Protection Agency, across the board ..."

Each item is a basic fundamental issue that benefits every American, and insures a healthy economy.

We are truly turning into the old Superman comics alternative universe known as “Bizarro World,” where everything is just the opposite of truth/common sense. Take a look at the Bizarro agenda, and tell me it doesn't sound real familiar: 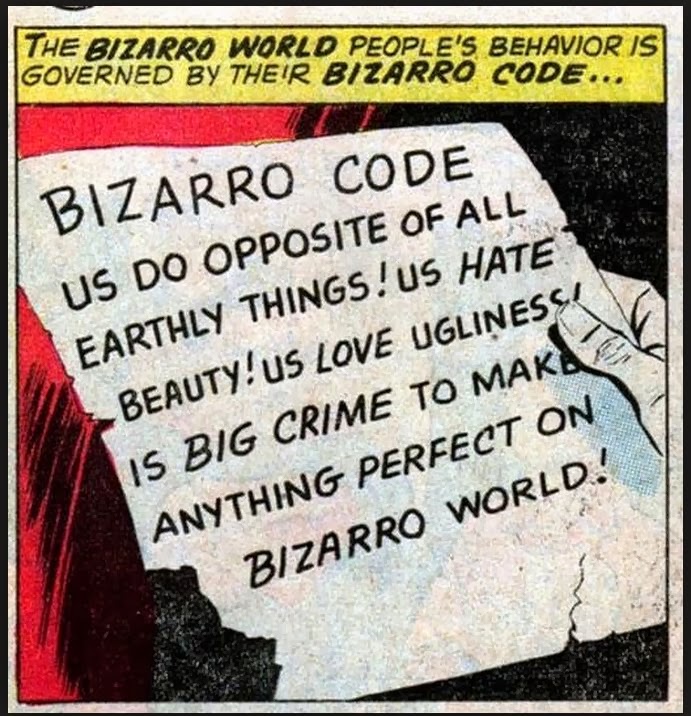 The quote in red above is something Sen. Mitch McConnell’s said in private. Huffington Post:

McConnell's been frank about what the GOP would do with the Senate … This quote comes from audio, obtained by Undercurrent's Lauren Windsor, of a talk McConnell gave to a Koch Brothers group in August:

"Most things in the Senate require 60 (votes) ... but not the budget. So in the House and Senate, we own the budget. What does that mean? ... No money can be spent to do this or do that. We're going to go after them on healthcare, on financial services, on the Environmental Protection Agency, across the board ..."

What that means, why it seems wrong, and why in gods name would voters put Republicans in charge when they're pushing health care uncertainty, financial uncertainty, and pollution?

1. Expose Americans to toxic threats … Cuts in EPA funding are intended to meet the GOP's stated goal of deregulating high-polluting industries … would lead to more fracking, more poisons in the groundwater, a higher risk of water-supply crises like the one recently experienced in West Virginia, increased air pollution... A sicker population which is at greater risk of environmental disaster.

And then there’s this jaw dropping giveaway to Wall Street and our Corporate pay masters:

McConnell said he would "definitely" defund the Consumer Financial Protection Bureau, calling it "the biggest part of the Dodd/Frank bill." "If I had my way, we wouldn't have the [CFPB] at all."


3. Ensure that money that financial institutions obtain dishonestly -- money like the $4.6 billion the CFPB has already returned to consumers -- would remain in the banks' pockets from now on.

4. Give a green light for credit-card companies to resume the "deceptive marketing practices" and other abuses that the CFPB has red-flagged: Three major credit card companies have returned a total of $425 million. Interventions like this would end under a GOP Senate.

Here’s an important one that will also negatively effect free market health care insurance contracts when the GOP kills ObamaCare:

8. Close down the CFPB complaint database: Consumers can now complain to the CFPB whenever they feel they have been cheated, abused, or misled by financial institutions. That would end, according to McConnell.

10. Protect "too big to fail" banks: Although Mitch McConnell claims otherwise, defunding Dodd/Frank would be a boon for too-big-to-fail banks. While he claims the law benefits them, the evidence suggests otherwise.

12. Allow more sneaky dealing in mortgages: In Undercurrent's audio clips, McConnell seems to suggest that mortgage lenders didn't contribute to the 2008 financial crisis. This is nonsense. Fraud and excessive risk-taking were endemic throughout the mortgage financing system, from the underwriting of new loans to the bundling and selling of mortgages to third parties. That epidemic of fraud and risk-taking was central to the financial crisis, and to a massive loss of wealth for the American majority.