When you're talking about giving a private insurance company nearly $13 million in additional profits by simply denying the expansion of Medicaid in Wisconsin, and receiving nearly $43,000 in campaign funding, you're talking the most brutal form of pay play.

The numbers prove that point below. And this is just one company of many profiting from Walker's nonsensical excuse that Medicaid funding isn't reliable. It's been disproven by PolitiFact months ago. These are ideologically driven hardball tactics used against Wisconsinites who are in desperate need of health care, the very people Walker supposedly serves. Oh, I forgot, he's a leader, not a public servant. 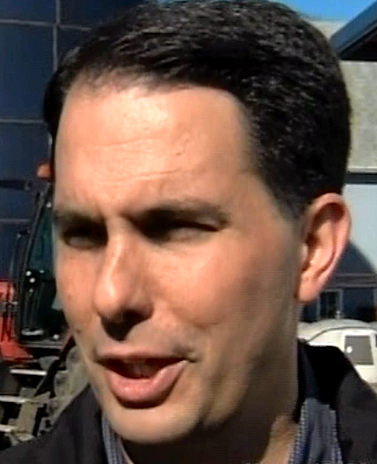 According to an analysis by Citizen Action of Wisconsin, Wellpoint Anthem Blue Cross Blue Shield of Wisconsin, part of the nation’s largest for-profit health insurance company, will make an estimated $12,785,484 in additional revenue each year because Governor Walker rejected enhanced federal funds for BadgerCare.

On a media call earlier this week CAW and Wisconsin Democracy Campaign released evidence of a relationship between large insurance industry campaign donations to Scott Walker and the rejection of federal funds for BadgerCare. The data shows that the insurance industry was the biggest beneficiary of the decision to reject the funds for BadgerCare and has made major large campaign contributions to Governor Walker and leading Legislators.

Here's WKOW's scoop showing a very unprepared Walker, whose phony know-it-all responses are the result of memorized talking points, not a knowledge of the subject. He's not curious, he's a politician:


Television journalist Greg Neumann of WKOW TV 27 in Madison captured Scott Walker on video stumbling to respond to Citizen Action of Wisconsin’s revelation that insurance industry donations may have swayed his decisions to reject hundreds of millions of federal dollars for BadgerCare.  In the news story, Walker says on camera that “to my knowledge they [the insurance industry] haven’t lobbied me personally or anyone in my administration on this.”