If you believe the industry, the science, technology, engineering, and mathematics (STEM) labor market has a shortage of workers that qualify for the available jobs. The tech industry is begging for guest workers to fill that gap.

Don't believe them. This phony argument has been going on for years. Check out this Lou Dobbs report from around 2004-2005:

But the Economic Policy Institute found proof the guest worker program, H-1B's, is a source of cheap labor that freezes out Americans.

Our examination of the IT labor market, guestworker flows, and the STEM education pipeline finds consistent and clear trends suggesting that the United States has more 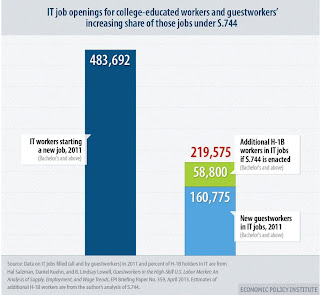 than a sufficient supply of workers available to work in STEM occupations:


The number of U.S. graduates with STEM majors appears to be responsive to changes in employment levels and wages. For every two students with STEM degrees, only one is hired into a STEM job … colleges graduate 50 percent more students than are hired into those fields each year; of the computer science graduates not entering the IT workforce, 32 percent say it is because IT jobs are unavailable … These responses suggest that the supply of graduates is substantially larger than the demand for them in industry. But employment and wage levels in IT jobs have been weak, trends that are not consistent with strong demand.

Wages have remained flat, with real wages hovering around their late 1990s levels … The annual inflows of guestworkers amount to one-third to one-half the number of all new IT job holders.

The data also strongly suggest that there is a robust supply of domestic workers available for the IT industry. The annual number of computer science graduates doubled between 1998 and 2004, and is currently over 50 percent higher than its 1998 level.

The implications of the data for enacting high-skill guestworker policy are clear: Immigration policies that facilitate large flows of guestworkers will supply labor at wages that are too low to induce significant increases in supply from the domestic workforce.