Proof and facts are hard things to shake off, unless you're a Republican governor hoping to run for reelection and then president. Walker seems to be creating a public image and narrative that runs counter to reality, an old marketing ploy used in advertising. How do you ignore a wage decline of 2.2%, twice the national average?

So the facts are in, and I'll let the disappointing details speak for themselves: 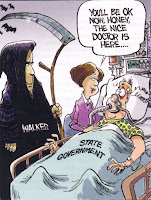 jsonline: Competition from China and other low-wage rivals, coupled with fallout from the 2007-'09 financial crisis, has put American wages under such unprecedented strain that they have shifted into reverse — not merely stagnating, but falling.

And workers in Wisconsin are among the hardest hit in this bare-knuckled global phenomenon.

Jeff Joerres, chief executive of Milwaukee-based global staffing giant ManpowerGroup Inc., who refers to this accelerating leveling of wages as "global labor arbitrage.""It's happening so fast on a global scale that it's scary," Joerres said.
Wages have fallen across the entire national economy — down 1.1% in the 12-month period from September 2011 to September 2012, the most recent comparisons available. The vise like pay squeeze promises to become more common as global economies become more connected — "the new normal," according to Joerres.

Wisconsin wages fall 2.2% ... ranking the state 44th out of 50.The rate was double the drop in the national average. Wages in the state's government sector, pressured more by government austerity policies than global competition, registered 49th in the nation during the same period.

With the state also lagging much of the nation in job creation — ranking 44th in the most recent 12-month period — it is apparent that Wisconsin is struggling more than many other states in the transition to 21st-century growth industries from its legacy as a bastion of old-line manufacturing.

I don't know, I think the above highlighted paragraph pretty much sums up the reason, but then you can't expect much from the chief operating officer of the mismanaged WEDC.
Posted by John Peterson, Democurmudgeon at 5/26/2013 10:55:00 AM