The Affordable Care Act and Medicare Costs Go Down, the Opposite of what Republicans are Claiming.

Despite Republican governors and legislatures turning down the expanded Medicaid program, resulting in slightly higher costs to Obamacare (thank them for making things worse), the overall cost of the Affordable Care Act is coming down. Since Medicare's costs are tied to the ACA, those costs are going lower as well.

The doom and gloom crowd will have to rely on their alternate reality to keep this lie alive. Here's Ezra Klein with the breakdown: 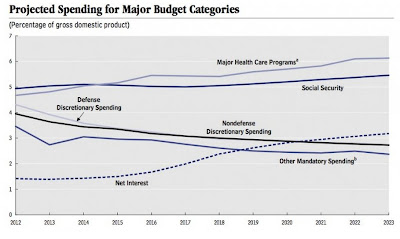 Here’s the short version: Washington’s most powerful budget nerds have cut their prediction for 2013 deficits by more than $200 billion. They’ve cut their projections for our deficits over the next decade by more than $600 billion. But then deficits will rise again. By 2023, they’re back up to 3.5 percent of GDP — not a dangerous level, but higher than is normal. That’s largely the baby boomers retiring and interest rates rising, in case you were wondering.

Spending on Medicare and Social Security is expected to rise by 1.1 percent of GDP. That’s more than all of the Affordable Care Act is expected to cost — even though it’s an entirely new program we’re setting up from scratch.

Obamacare has gotten a bit cheaper since it first passed. “In March 2010, CBO and JCT projected that the provisions of the ACA related to health insurance coverage would cost the federal government $759 billion during fiscal years 2014 through 2019 (which was the last year in the 10-year budget window being used at that time). The newest projections indicate that those provisions will cost $710 billion over that same period.”

“Additional data on spending in 2013 caused the CBO to reduce projected spending by about 1 percent for Medicare benefits this year and over the 2014–2023 period.” So it got cheaper once this year, and now it’s getting cheaper again. This is the CBO beginning to believe that at least some portion of the slowdown in health-care costs is permanent.