The ego enveloped arrogance of Dumb Ron Johnson is just too much to take anymore. Did Wisconsinites vote for this kind of unencumbered cruelty in pursuit of a balanced budget? 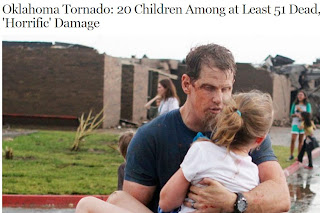 WSJ; Several Republican senators said that the cost of any emergency aid bill crafted to provide aid to people affected by the enormous tornado that touched down in Oklahoma Monday must be offset by cuts elsewhere to the federal budget to defray costs to the taxpayer.

Conservative GOP senator Ron Johnson (R., Wis.) said that any emergency aid bill must include matching spending cuts to ensure there is no increase in the budget deficit.

“We should be able to find plenty of areas in the budget to offset that,” said Mr. Johnson, a tea-party backed lawmaker from Wisconsin. “I would vote against a bill that didn’t include offsets.”

This ABC video summary should tell you everything you need to know about Johnson's detached irrational response. One more thing, anyone want to continue to beat up on teachers?: