The Forward Institute has released a new study, Wisconsin Budget Policy and Poverty in Education, that came up with a strong case for doing away with the voucher program, along with suggestions on how taxpayers can get more bang for their buck. It also broaches the possibility that Scott Walker and the Republicans went too far when they cut education, violating the state constitutional guarantee of providing for and funding public education: 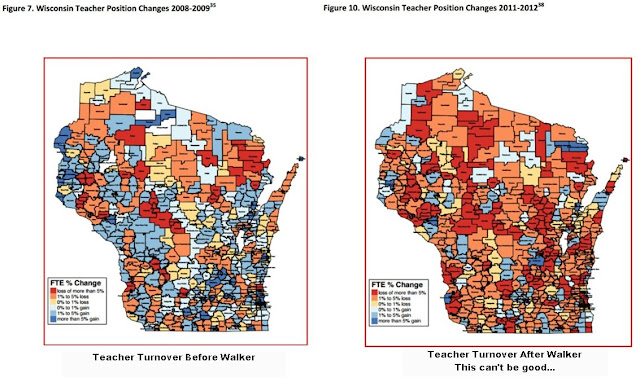 The fundamental nature of our values is reflected in the State Constitution, which guarantees all children equal access to educational opportunity in our public schools. That constitutional right is now being systematically eroded and defunded. The research presented in this report shows that current fiscal policy and education funding are depriving our poorest students access to a sound public education. Public schools are not failing our children, Wisconsin legislators and policymakers are failing the public schools that serve our children.

On average, schools with higher poverty enrollment levels have experienced per-pupil funding cuts over 2 times the cuts in the most affluent districts.  If the Walker proposal to increase voucher school funding is adopted, over $2,000 more will go to a K-8 voucher student than a public school student. A voucher high school student will receive nearly $3000 more in state aid than a public school student. When controlling for inflation, K-8 voucher schools will have seen a $400 increase, and voucher high schools a $1000 increase in per student funding from the 1999 school year. In comparison, public schools will have seen a $1000 per student decrease from the 1999 level.

The Walker budget proposes to expand voucher schools into districts where School Report Card scores “fail to meet expectations.”  This proposal will assure that more schools and school districts of high poverty will lose resources … resulting in education austerity.

There is strong evidence that the current public education funding and delivery system in Wisconsin is unconstitutional. When compared to their more affluent peers, students of poverty are not receiving an adequate public education as defined by State Supreme Court precedent, statutes, and the State Constitution.

Achievement gaps are largely attributable to factors outside of school walls. If Wisconsin is to substantially narrow these gaps, education policy must incorporate health and nutrition supports and after-school enrichment to address barriers to learning that are driven by child poverty.

The 20 year Milwaukee and one-year Racine private school voucher experiment should be sunsetted by the Legislature in 2024. Taxpayers should not be forced to fund a second statewide school district, nor an expensive entitlement program, when the public schools are not failing. The failure of Wisconsin policy makers to acknowledge and address these issues is creating a generation of economically disadvantaged students that will lag far behind their more fortunate peers.