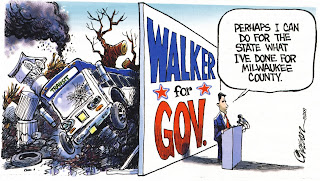 Scott Walker is taking us back to simpler time. Dirt roads are returning, thanks to the "kick the can down the dirt road" Republican Party and their no tax pledge. Transporting goods and services might get a little bumpy.

This jaw dropping story is too bizarre for words, but it's real and actually happening under the Walker Administration. Think what he could as president. Channel3000:


Town Chairman Larry Harding: "There's 101,000 miles of roads in the state of Wisconsin, and the towns have 61,000 of those miles. Yet we get 33 percent of the transportation aid returned back to fix roads with," he said. "Instead of paving and chip sealing and pothole-filling, we would just take a grader, and the road would be graded just like back in the 30s," he said.

Public Works Director Ben Coopman added the town of Avon has already begun converting its roads to gravel, then putting a thin layer of oil over the rocks, a procedure he said is about two-thirds the cost of paving a road.