How Does Scott Walker, the job killing/WEDC failing governor, keep his approval ratings up?

I have never been able to figure out how Scott Walker got reelected in the Democratic stronghold of Milwaukee as their county executive, time after time, with his horrible record. 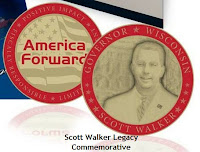 Walker continues that streak with a strong approval rating despite failing over and over again at what was supposed to be the Republican Party's central focus: jobs.

He continues to brag about balancing the budget, a fete matched only by...every other governor. He's pit neighbor against neighbor, divided the state permanently, and keeps accumulating power like other notorious world dictators.

PPP is out with their latest, and here's the mind bending numbers-we love Scott Walker:


The poll found little change from previous surveys in Walker’s approval rating: 51% approved and 45% disapproved of his performance in office.  That’s consistent with almost all the polling on Walker that Marquette has done over the past 12 months.

President Barack Obama’s Wisconsin numbers were identical:  51% approved and 45% disapproved of his performance in office.