You were warned about Walker.... 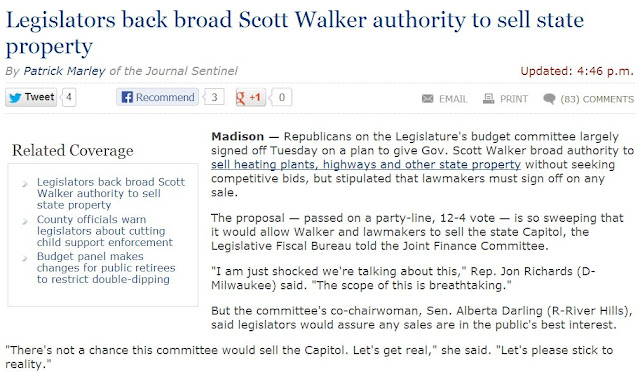 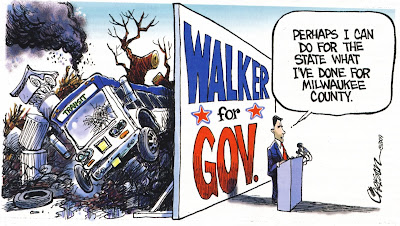 For the record, the full context:

jsonline: The proposal — passed on a party-line, 12-4 vote — is so sweeping that it would allow Walker and lawmakers to sell the state Capitol, the Legislative Fiscal Bureau told the Joint Finance Committee. "I am just shocked we're talking about this," Rep. Jon Richards (D-Milwaukee) said. "The scope of this is breathtaking."

But the committee's co-chairwoman, Sen. Alberta Darling (R-River Hills), said legislators would assure any sales are in the public's best interest. "There's not a chance this committee would sell the Capitol. Let's get real," she said. "Let's please stick to reality."

The plan was folded into the state budget, which the Legislature plans to take up next month. It will then go to Walker, who can rewrite parts of it with his broad veto powers. Sen. Bob Wirch (D-Kenosha) noted that Walker has vast veto powers and could remove all legislative oversight of the sales from the proposal this summer. Walker and his successors would be able to pursue such sales.

I'm sure this is reassuring:

The administration has said it does not have current plans to sell highways, prisons, university dormitories or other properties that provide public services.

"Our precious state assets are not fodder for Craigslist," said a statement from Senate Minority Leader Chris Larson (D-Milwaukee).

Drawing much of the debate has been the proposal to sell 33 heating, cooling and power plants, saying doing so would saddle the state with higher day-to-day operational costs. The state would have to contract with the buyers of the plants for their output. Critics have said that would likely drive up costs because the new owners would charge prices that left them room for a profit.


“The Legislative Fiscal Bureau noted in its analysis that ‘The legislature would be forgoing any future ability to review these decisions and determine whether such sales or leases would be in the long-term best interest of the state.’”