India Raises Minimum Wage, brings in Unions to save lives.

It looks like India is about to raise their minimum wage and bring in the unions.

Hmm, minimum wage increases and union representation…where have I heard that before? Oh, those are Republican targets for cuts in the U.S..

While at the same time in India, after 1,126 factory workers were crushed by a collapsing garment building, there’s a move to increase the minimum wage and expand union representation to improve working conditions and save peoples lives.

The U.S. is trying to be more like the India that even India doesn't want to be like.

Will Democrats even mention this tragic accident as a way to demonstrate how the U.S. had progressed beyond the slave labor wages and working conditions we saw in the 1920’s and 30’s? 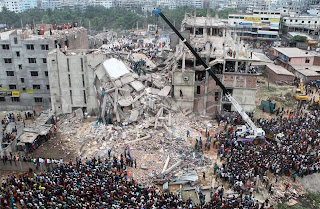 Radio Australia: The Bangladeshi Government is promising to increase the minimum wage for more than three million of the country's garment workers …the panel will include union representatives as well as factory owners.

The announcement came as the death toll from the country's worst industrial disaster climbed to 1,126 - 19 days after a nine-story garment factory complex in a suburb of Dhaka caved in and buried thousands of workers. Workers at the country's garment-manufacturing hub of Ashulia on the outskirts of Dhaka left their factories en masse Sunday morning to demand an increase in wages. "Up to 30 factories suspended production for the day as tens of thousands of workers refused to work."-AFP news agency.


They also demanded the death penalty for Sohel Rana, owner of the collapsed Rana Plaza complex, who was arrested at Bangladesh's main border crossing with India after a four-day manhunt last month. He is accused of forcing laborers to work on April 24, the day of the collapse, even though cracks appeared in the building a day before.

Another fire last November killed 111 garment workers, the worst blaze in the history of the country's textile industry.

My research turned up this short moment in U.S. history reflecting just how bad things were then, and how similar things are now:


The richest people in society felt no sympathy for the starving masses. They had spent the previous decade slashing wages and breaking unions, with widespread success. By 1929, the American Federation of Labor (AFL) had lost a million members.

With the onset of depression, they banded together as a group to oppose every measure to grant government assistance to feed the hungry or help the homeless. Most employers flatly refused to bargain with any union, and used the economic crisis as an excuse to slash all wages across the board. But in so doing, they unleashed the greatest period of social upheaval that has ever taken place in the United States.

When faced with working-class opposition, the ruling class responded with violence. Police repeatedly fired upon hunger marchers in the early 1930s. In 1932, for example, the Detroit police mowed down a hunger demonstration of several thousand, using machine guns. Four demonstrators were killed and more than 60 were injured. Yet afterward a city prosecutor said, "I say I wish they’d killed a few more of those damn rioters."  In 1933, FDR granted workers the right to organize into unions in Section 7(a) of the National Recovery Act … But everywhere the employers put up violent resistance. In the South, the ruling class unleashed a torrent of racism and anti-communism, while armed mobs attacked strikers. The Gastonia Daily Gazette ran "Communism in the South. Kill it!" as a front-page headline. Employers distributed anti-union leaflets that read, "Would you belong to a union which opposes White supremacy?"

In Gastonia, North Carolina, National Guardsmen joined by armed strikebreakers, were ordered to "shoot to kill" unarmed strikers: Without warning came the first shots … Striker after striker fell to the ground … In Burlington, North Carolina, soldiers bayoneted five picketers in a group of 400, all of whom were wearing "peaceful picket" badges. In the North, when National Guard troops occupied mill towns all over New England ... Rhode Island’s Democratic governor declared that "there is a communist uprising and not a textile strike in Rhode Island," and called the legislature into special session to declare a state of insurrection and request federal troops.