The Price of Failed Republican Policy now including Austerity.

We're pulling out of the Great Recession despite ourselves. Even the job creation failures of Scott Walker and his parties attacks on industries they don't like hasn't stopped the recovery and have resulted in a state surplus.

But wait, things could be even better:


NY Times: According to estimates by Moody’s Analytics, recent fiscal tightening through budget cuts and tax increases will slow economic growth for 2013 by about 1.2 percentage points and prevent the unemployment rate from falling to 6.1 percent by the end of the year. Several other economists and forecasters, including Pantheon Macroeconomic Advisers and IHS Global Insight, have come to similar conclusions.

It would be fair to mention that even after raising income taxes for the wealthy, we are now raking in tax revenues like never before. Millionaires have not to my knowledge, given up and gone home, and Americans are still starting businesses. The sky did not fall, the economy did not crash and success was not penalized. So there. 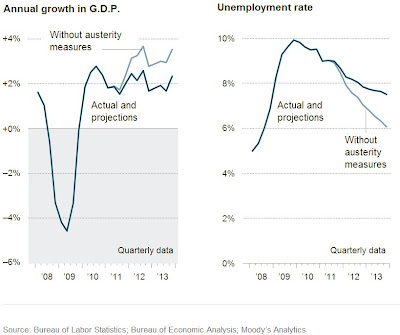 Labels: Austerity
Email ThisBlogThis!Share to TwitterShare to FacebookShare to Pinterest