Sen. Elizabeth Warren just started the push to offer a low .75% student loan interest rate as an investment in our economic future. How crazy is that?

Meant to be a one year fix, Warren may have come up with a permanent fix to the problem of crushing student loans that end up stifling our economy.  Here are two email press releases I received this morning: 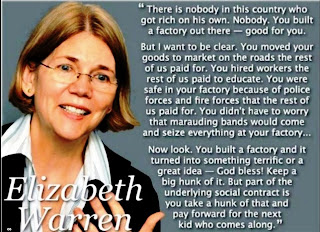 naturally it's a stroke of genius. Called the "Bank on Student Loan Fairness Act," the bill would give students the same low rates on loans which the nation's biggest banks currently receive. Students are the ones that are going to be responsible for rebuilding this country, and they shouldn't be saddled with crippling debt before they even get a chance to start doing that. Here's what Warren said about her bill when she introduced it on the Senate floor.


"Some people say that we can’t afford to help our kids through school by keeping student loan interest rates low. But right now, as I speak, the federal government offers far lower interest rates on loans, every single day–they just don’t do it for everyone. Right now, a big bank can get a loan through the Federal Reserve discount window at a rate of about 0.75%. But this summer a student who is trying to get a loan to go to college will pay almost 7%. In other words, the federal government is going to charge students interest rates that are nine times higher than the rates for the biggest banks–the same banks that destroyed millions of jobs and nearly broke this economy. That isn’t right."

Arshad Hasan, Executive Director-Democracy for America: Congress is set to double the cost of student loans from 3.4% to 6.8% --while offering huge corporate banks the low rate of 0.75%.You read that right. Congress punishing young men and women looking to start their careers and families, while offering the biggest banks a 900% discount. Here's what Sen. Elizabeth Warren had to say about that:


"As a country, every time we advance money to the big banks at low interest rates, we invest in those banks. We should be making at least that same kind of investment in our students."

She's right -- and she just introduced her first bill to the Senate to fix this absurdity.