Tea party to silence dissent next, starting with MSNBC

The tea party hopes to protest, intimidate, and take down MSNBC, the fact based counter voice to Fox News Propaganda channel. 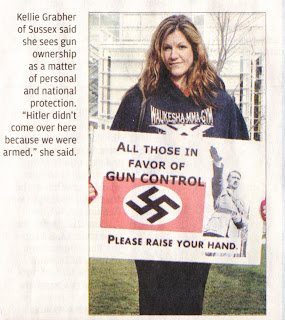 The heavily authoritarian conservative movement is now setting its sights on shutting down all other alternative and opposing viewpoints. The First Amendment doesn't say anything about protecting liberal thinking and speech.

Time and time again, Fox News has been exposed as a purely propagandist network pushing the Republican agenda, creating phony issues and outrage. So what could they do to save face? Say the other guys are just as guilty and silence them? Why not, it doesn't take much for liberals to throw in their cards.

Recent research indicated MSNBC had the most editorial content of the news networks, pretending the Fox “News cast’s” contained real, spin free content, which we know is not true.

What that research didn't get into and should have, was that the MSNBC editorials contained real news and real facts. Any “spin” came in their editorial opinions after a review of those facts.
Which brings me to this bizarre upcoming protest of MSNBC.

Huffington Post: Those attending Comcast’s annual meeting of shareholders in Philadelphia on May 15 might have to wade through a throng of conservative protesters angry about the media conglomerate’s news coverage at its left-leaning MSNBC cable network. And since some of the demonstrators are also shareholders, they’re planning on taking their act inside, as well, where they’ll accuse Comcast CEO Brian Roberts of engaging in liberal propaganda instead of news at MSNBC.

The initiative is Stage 1 in an effort  organized by tea partyers and other right-wing activists to challenge Roberts about Comcast’s news operations in a variety of public forums.

This week, 60,000 invitations were emailed to tea partyers in and around Philadelphia and word went out to about 4 million more nationwide that their services are needed.

Get a load of the liberal horrors being unleashed into our social debate over the issues. Oh, and isn't this the most outrageous example yet of projection?:


“The news programs at NBC and MSNBC, run by Comcast CEO Brian Roberts, reflect total agreement with the Obama agenda,” reads the email, which comes from FreedomWorks, one of the nation’s leading tea-party groups. “These ‘news’ organizations even adopted the Obama re-election campaign’s ‘Forward’ slogan. Is this what Comcast subscribers and American voters need?”  the invitation says. “It’s one thing to be supportive of the president. It’s another thing to parade propaganda as objective news.” Among the organizers are Tom and Deneen Borelli, who have a habit of showing up at shareholders meetings for a variety of companies they own stock. Conservatives around the country are really upset over the class warfare, race baiting and anti-Second Amendment propaganda advanced by MSNBC.

I'm beginning to think Republican voters don't really have a choice anymore. They either vote their party or vote Democratic, and the latter is just not going to happen.
Posted by John Peterson, Democurmudgeon at 5/09/2013 09:58:00 AM