Does Sen. Tammy Baldwin know how to secure votes or what? 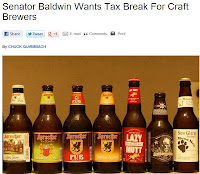 brewers get a federal tax break. Jeff Hamilton of Milwaukee’s Sprecher Brewing, who is also president of the Wisconsin Brewers Guild, went to Capitol Hill this week to argue for a bill that would reduce the excise tax, a tax tied to the amount of production on each barrel of beer brewed by small brewers. Senator Baldwin is a co-sponsor of the measure. She contends the millions of dollars in federal revenue lost by the tax cut would be more than offset by small brewers adding employees, who would then pay more income taxes: “Alleviation and reduction of the excise tax is going to be a direct investment in our local economy, in our local communities, and lead to jobs.”


Sprecher's Jeff Hamilton says his point is that the true small brewers opening up in small towns can be a sizable plus for the local economy: “It does bring back little towns, it brings people into towns.“

Unfair to the large brewers? I don’t think so…

Baldwin says through separate efforts, larger brewing companies like MillerCoors are also looking for a reduction in their excise tax.