Scott Walker miffed tea parties were discouraged by IRS. This from the guy supporting voter suppression?

Just to show how bent out of shape conservative opportunists are, wacko Wall Street columnist John Fund tried to jump on the IRS tea party controversy, but instead showed just how big a scam the tax exempt status was for teatards.

But that’s not all, Scott Walker has even weighed in, as he appeals to the easier to convince low information voter we know as teabillies.

Fund is outraged that many tea party groups didn't get the chance to get out the vote. Oops, that’s social welfare and not politics? John Fund must know tea parties could have just filed the paper work, advocating under the radar. He did make it clear tea parties were all about politics, which could end up being exhibit b in the case against allowing any of these groups tax exempt status (including liberal ones).

Newsmax: The IRS could be directly to blame for lower voter turnout during the 2012 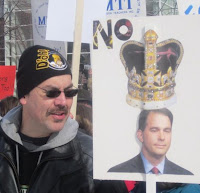 election after conservative groups were left sidelined by the IRS decision to target them, according to John Fund … it now turns out there may have [been] suppression of the vote after all," he wrote, pointing to a conversation he had with Wisconsin Gov. Scott Walker, who said, "It looks like a lot of tea-party groups were less active or never got off the ground because of the IRS actions. Sure seems like people were discouraged by it."

So voting suppressed is good under Walker's view that hoop after hoop be put in place, but tea party costumed freaks and retirees should electioneer tax free with no regulation?